A currently retired 71-year-old Chinese male has a history of diabetes mellitus, hypertension, and ischemic heart disease. He is an ex-smoker and until recently, drinks 2 to 3 cans of beer per day. A summary of the case presentation is illustrated in Figure 1. 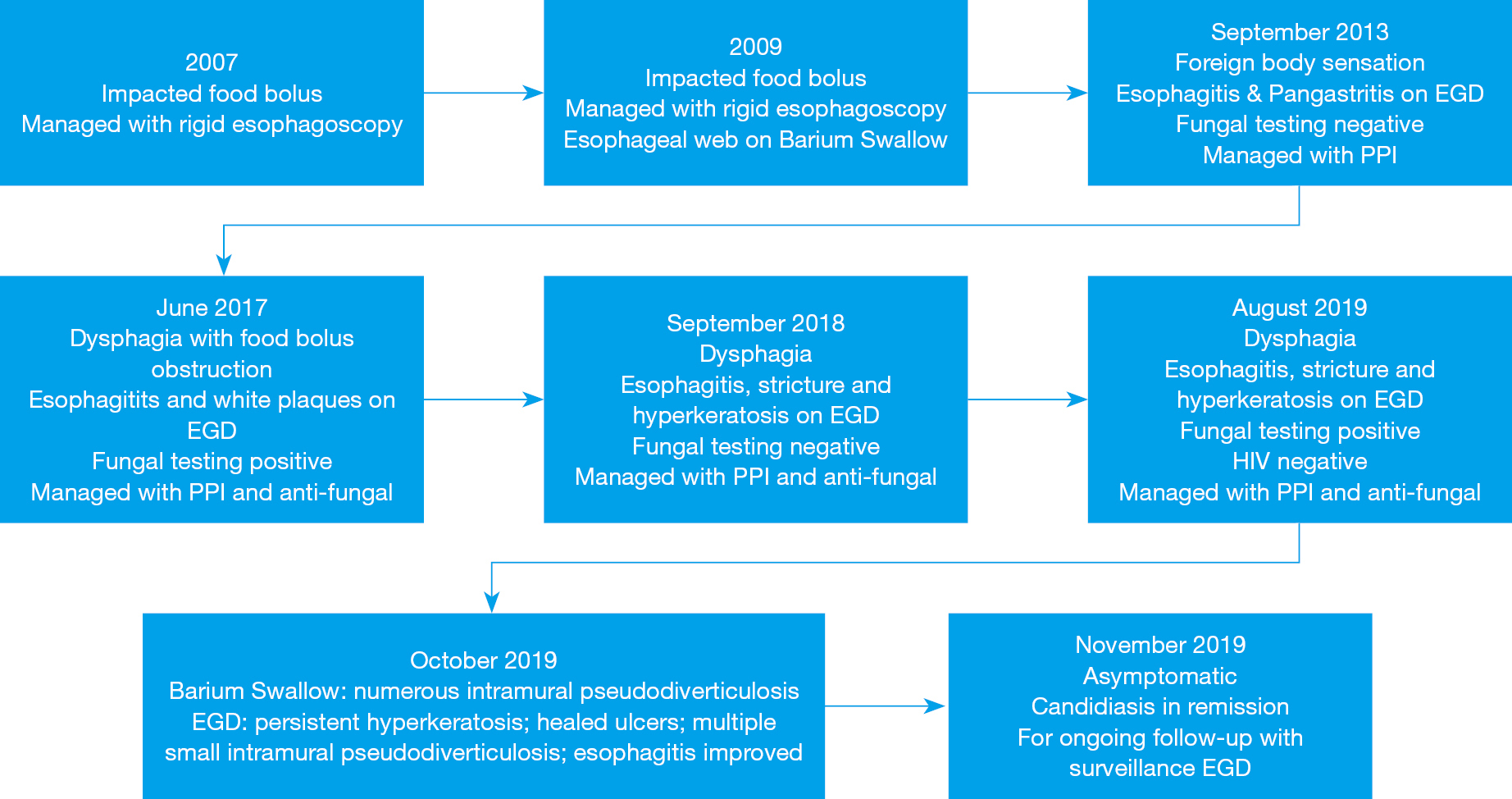 He had 2 previous episodes of impacted food bolus in the upper esophagus that were cleared with rigid esophagoscopy in 2007 and 2009. Barium Swallow and Meal study done in 2009 demonstrated a thin, incomplete membrane arising from the anterior wall of the cervical esophagus at the level of C6. There was no circumferential involvement seen. The finding was consistent with an esophageal web. There was no significant obstruction to the flow of contrast down the esophagus. The esophageal mucosa was otherwise of normal contour, with no intraluminal mass seen. Mild gastro-esophageal reflux into the distal esophagus was demonstrated. No intraluminal gastric mass, stricture or peptic ulcer disease was detected.

In September 2013, he was admitted to hospital for foreign body sensation at the base of throat after eating. Esophagogastroduodenoscopy (EGD) showed esophagitis with whitish plaques. The endoscope passed through the esophagus with some resistance. There was also pangastritis with erosions. Gastric antrum biopsy showed mild chronic inflammation with no evidence of atrophic gastritis. Esophageal biopsy showed mild lymphocytic infiltration, no dysplasia or carcinoma. Fungal testing proved negative. He was treated with a short course of proton pump inhibitor, Omeprazole 40 mg BD for 2 weeks.

In June 2017, he presented to hospital again with acute dysphagia. CT Neck showed a bolus of ingested material impacted in the upper esophagus. There was also diffuse mural thickening of the esophagus distal to the bolus, possibly a response to chronic inflammation. The food bolus cleared spontaneously before he underwent EGD. Endoscopy showed an irregular mucosa with whitish plaques at upper esophagus (Figure 2). Biopsy from the esophagus showed acute erosive esophagitis and returned positive for fungal organisms. Gastric biopsy from the antrum and incisura showed chronic gastritis with intestinal metaplasia. He was treated with Omeprazole 40 mg BD for 6 weeks and Fluconazole 200 mg OM for 3 weeks after a loading dose of 400 mg. 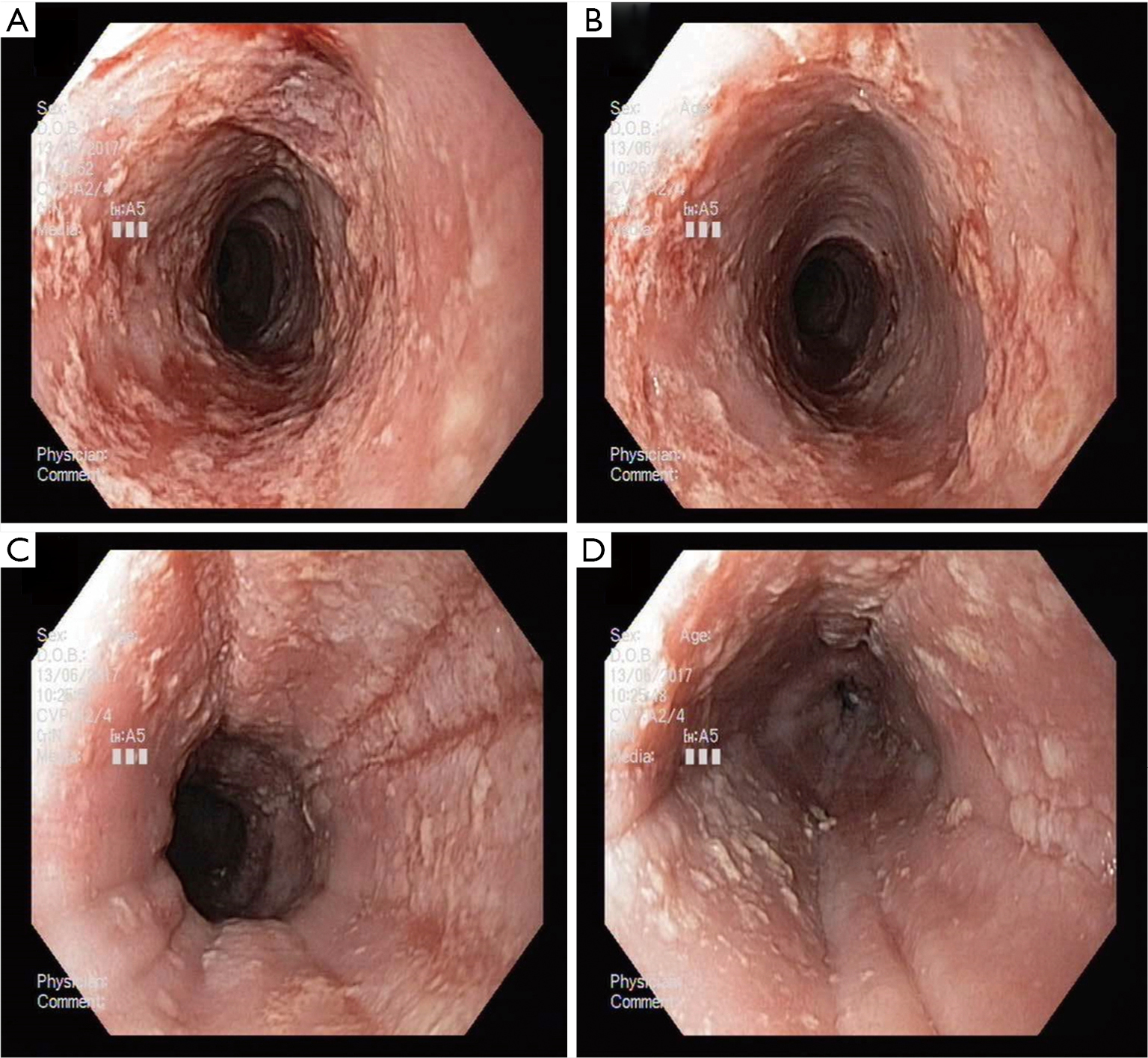 Figure 2 Endoscopic appearance of the upper esophagus (A,B) and lower esophagus (C,D) in June 2017 when candidiasis was first diagnosed.

About 15 months later in September 2018, he presented with recurrent dysphagia to solids of 2 months duration. Repeat EGD showed inflammation and benign stricture at the upper esophagus. The gastroscope was unable to pass through the stricture. A pediatric gastroscope was used for the rest of the examination. There was esophagitis of entire esophagus likely from fungal infection. White and yellow plaques were seen at 33–34 cm from incisors (Figure 3). Severe chronic pangastritis of the stomach, worse at antrum. Histology of the distal esophagus biopsies demonstrated hyperkeratosis and reflux changes while the proximal biopsies showed esophagitis. No yeast spores or pseudohyphae were seen. The gastric biopsies showed mild to moderate chronic gastritis with intestinal metaplasia. He was treated with another 3 weeks course of oral Fluconazole 200 mg OM after a loading dose of 400 mg based on the endoscopic findings of suspected candidiasis.

Figure 3 Endoscopic appearance of the upper esophagus with benign stricture (A) and active inflammation with ulceration (B) in September 2018 when candidiasis recurred.

In August 2019, the patient underwent repeat EGD for recurrent dysphagia. A pediatric gastroscope was used. There were whitish plaques likely from candidiasis causing a short segment stenosis at 20–22 cm from the incisors. Hyperkeratosis was seen from 24–34 cm from incisors, while the distal 6cm of esophagus appeared relatively normal. Pangastritis with intestinal metaplasia changes were again seen in the distal stomach. In view of presence of active acute inflammation, esophageal dilatation for the symptomatic stenosis was not performed. Nasoendoscopy was also performed and it was completely normal. CT scan of the neck, thorax, abdomen, and pelvis in August 2019 showed diffuse mild mural thickening of the esophagus with small volume peri-esophageal reactive lymph nodes likely represent known fungal esophagitis. No discrete esophageal mass is identified. Serological screening for HIV infection was negative. Esophageal biopsy and fungal cultures subsequently returned positive results for Candida albicans and the patient received another 3 weeks course of oral Fluconazole 200 mg OM after a loading dose of 400 mg in September to October 2019.

Barium Swallow study performed in October 2019 demonstrated that the patient was able to swallow barium without any difficulty. There were multiple small ulcers seen at the upper half of the esophagus, in keeping with fungal esophagitis. However, no stricture or mass or stenosing lesion was seen and no hold up of the column of contrast was noted in the esophagus. No significant gastro-esophageal reflux was evident.

The patient was reviewed in October 2019 soon after the third treatment course for esophageal candidiasis. His dysphagia symptom had improved significantly. A repeat EGD was planned to check for resolution of the esophageal candidiasis. EGD showed multiple small pits in the esophageal wall from intramural diverticulae starting at 19 to 38 cm from the incisors. Esophagitis had much improved with no significant stricture but the hyperkeratosis of the esophagus persisted, starting at 24 cm to the cardio-esophageal junction at 40 cm, most prominent from 32 to 33 cm (Figure 4). Biopsies of the distal esophagus showed moderate reflux esophagitis and keratin while the proximal esophageal biopsy showed unremarkable squamous epithelium. 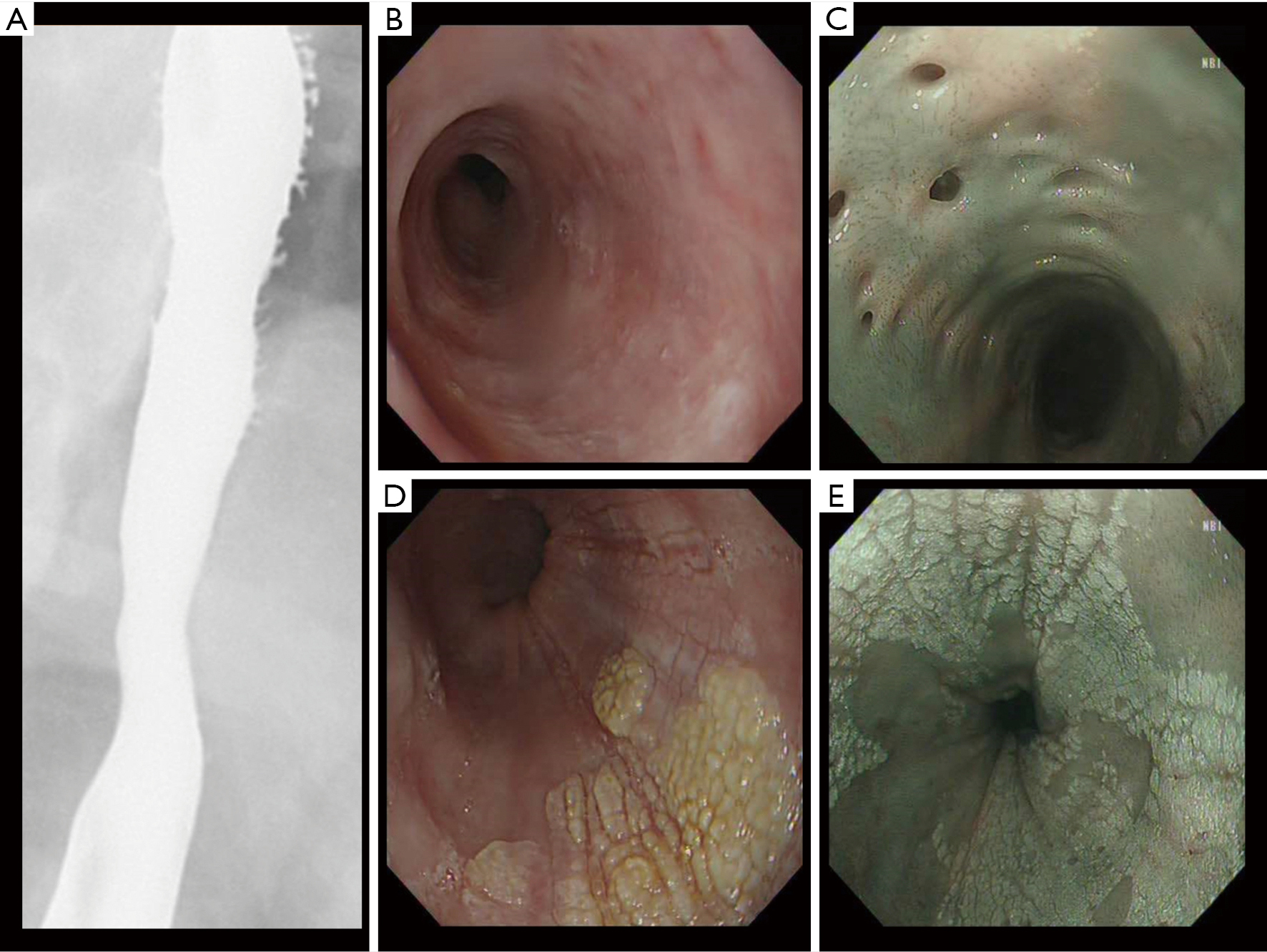 After pharmacological treatment of the candidiasis, the patient was reviewed twice in November 2019. He has been asymptomatic, with good appetite and no dysphagia. The candidiasis was considered to be in remission. The plan was to continue follow-up with surveillance EGD for the esophageal hyperkeratosis and chronic gastritis with intestinal metaplasia.

All procedures performed in studies involving human participants were in accordance with the ethical standards of the Centralised Institutional Review Board and with the Helsinki Declaration (as revised in 2013). Written informed consent was obtained from the patient.

Dysphagia is one of the commonest symptom of esophagitis which, in chronic disease, can be a manifestation of stricture formation and it may progress to cause food bolus obstruction. The most common cause of esophageal stricture is gastroesophageal reflux. For our patient, he did have mild gastro-esophageal reflux disease as evident from the earlier barium study and esophageal biopsies showed moderate reflux esophagitis. Whether the reflux disease contributed to candidiasis and the upper esophageal stricture remains unknown. Esophageal stricture is a rare complication of esophageal candidiasis with very few cases being reported in the literature. Kim et al. documented a case of a 57-year-old woman complaining of dysphagia, nausea and vomiting who was found to have esophageal candidiasis complicated by esophago-mediastinal fistula and strictures. Anti-fungal therapy resolved the fistula, whilst the stricture was dilated under fluoroscopy, and the patient improved and tolerated a solid food diet (8). Another report documented a case of a child with glycogen storage disease 1b and recurrent dysphagia that was diagnosed with esophageal candidiasis complicated by stricture. Similarly, anti-fungal treatment and esophageal dilatation resulted in resolution of the stricture (9).

Our patient had first presented with intermittent food bolus obstruction in 2007, some 10 years prior to the eventual diagnosis of esophageal candidiasis in 2017. He also had recurrent candidiasis and had received repeated courses of anti-fungal medication that each time resulted in improvement of his symptoms between episodes and so far had not required dilatation of the stricture.

There are case reports documenting clinical esophageal leucoplakia with histological hyperkeratosis in conjunction with esophageal mitotic lesions (15-17). While the malignant potential of esophageal leucoplakia is unknown, given the strong association between esophageal leucoplakia and squamous dysplasia, it is recommended for patients with esophageal leucoplakia to undergo close monitoring with treatment by endoscopic resection or ablation (7). Furthermore, studies have demonstrated evidence that esophageal candidiasis has a causative role in the development of esophageal cancer, through production of carcinogenic nitrosamines like nitroso-N-methylbenzamine (NBMA) and other less clear mechanisms (18). In light of such morbid sequelae for a treatable infection, aggressive treatment of candidiasis is recommended. According to the Infectious Diseases Society of America, their Clinical Practice Guideline for the Management of Candidiasis clearly outlines treatment recommendations for different patient groups (19). Our patient’s treatment was in-line with their recommendation, which resulted in resolution of his esophagitis and stricture.

There are some limitations of our case report. Firstly, we assumed the immune status of our patient to be non-immunosuppressed based on his negative HIV serological testing and clinical presentation. However, his age and medical history of diabetes mellitus may have contributed a degree of immunosuppression. HIV testing was only conducted in 2019, and although it was negative, HIV testing is well associated with false negatives in its latency phase, and ideally serial HIV testing should have been conducted given his recurrent candidiasis (20). Secondly, our patient was only formally diagnosed with esophageal candidiasis in 2017 based on fungal testing, and it is unclear if our patient was colonized with Candida or was symptomatic with esophageal candidiasis since the start of his symptoms in 2007. This makes it unclear as to the effect of possible long-standing esophageal candidiasis on his esophageal stricture and hyperkeratosis, and if earlier treatment could have prevented these complications.

In conclusion, clinicians should have a lower threshold for considering esophageal candidiasis even in non-immunosuppressed patients presenting with esophageal symptoms and have earlier consideration of esophageal biopsies and fungal testing and ensuing fungal eradication therapy if indicated. Our case report also serves to highlight the possible clinical presentation, disease progression and complications that may arise from chronic esophagitis and recurrent esophageal candidiasis.

Reporting Checklist: The authors have completed the CARE reporting checklist. Available at http://dx.doi.org/10.21037/aoe-20-29

Conflicts of Interest: All authors have completed the ICMJE uniform disclosure form (available at http://dx.doi.org/10.21037/aoe-20-29). The authors have no conflicts of interest to declare.

Ethical Statement: The authors are accountable for all aspects of the work in ensuring that questions related to the accuracy or integrity of any part of the work are appropriately investigated and resolved. All procedures performed in studies involving human participants were in accordance with the ethical standards of the Centralised Institutional Review Board and with the Helsinki Declaration (as revised in 2013). Written informed consent was obtained from the patient.