Achalasia and cancer prevention and surveillance

The association between achalasia and esophageal cancer (EC) has long been recognized. The first description of this association occurred in 1872, when an English physician called Charles Hilton Fagge described a case of an 84-year-old patient with a 40-year history of dysphagia, who developed a tumor in a dilated portion of the esophagus (Figure 1) (1). Since then, several studies have shown this association (2-5). 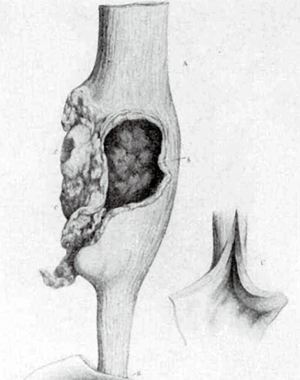 Figure 1 First description of an esophageal carcinoma in a case of achalasia. Reproduced from Fagge (1) with permission by King’s College London Archives.

Several putative factors are identified as causative for this association, from chemical irritation caused by saliva and food decomposition in esophageal lumen secondary to stasis could lead to dysplasia (6); increased volatile nitrosamines secondary to bacterial growth inside the esophagus (7) to genetic factors (8).

The real chance of a patient with achalasia developing esophageal squamous cell carcinoma (SCC) is unknown and it is variable in the literature. Absolutely discrepant rates have been described ranging from 0 to 33% (9-14). In a paper that reviewed clinical studies with a minimum follow-up of 5 years, Eckardt et al. found rates closer to reality, ranging 0 to 7% (15).

Although some older studies have not shown cases of esophageal cancer in patients with achalasia (9,16,17), two recent meta-analysis have shown that the incidence rate of SCC in patients with achalasia varies from 1.36/1,000 patients-years (18) to 3.12/1,000 patients-years (19) and express risks, respectively, of 1.5% and 2.8%. These rates are 15 and 34 times higher, respectively, than the risk of esophageal SCC in the general population, according to the International Agency for Research on Cancer (IARC) (20). Furthermore, these studies have shown that the onset of cancer rarely occurs before 5 years of disease, and after the tenth year that the incidence increases significantly. Another meta-analyses found an incidence rate of 2.05/1,000 patients-years in patients treated for achalasia, especially after 10 years of disease (21). Thus, according with the Guidelines of the International Society of Diseases of the Esophagus (ISDE), patients with achalasia have a moderate increase in the risk of developing CCS within 10 years of initial achalasia treatment (22).

There is evidence that patients with achalasia have an increased incidence of esophageal adenocarcinoma (EAC) up to 6 times higher than the general population (19) and this fact could be explained by the carcinogenic effect of treatment of achalasia leading to gastroesophageal reflux disease (GERD) and Barrett´s Esophagus (BE) (23,24). Indeed, BE has been reported up to 9% after achalasia treatment with pneumatic dilatation (25) and in 5.5% after Per Oral Endoscopic Myotomy (POEM) (26). BE after Heller myotomy and fundoplication (HMF) is a rare event and appears long time after treatment and it dependent on failure of the operation (27,28). However, there are cases of EB development in untreated patients (29). The reason for this phenomenon is unknown, and the main hypothesis is that chronic inflammation caused by food and saliva retention could trigger the cascade of events leading to BE (30). However, the real association between achalasia and EAC is controversial and remains unknown.

This variation of risk, prevalence and incidence rates is probably explained by duration of follow-up of achalasia in each study (11,19,21), since significant increase in the onset of neoplasia is observed in long-term studies (15).

The role of surveillance in achalasia is a topic that has been discussed for decades with no consensus and several controversies (30-32). Patients with achalasia have a higher relative risk than the general population to developing EC (10 to 50 times), but with a relatively low absolute risk (about 1.5% to 3%). These rates express an incidence of 0.1% to 0.3% per year (18,19). It means that we need to perform about 400 endoscopies in patients with achalasia to find 1 case of EC (11). Besides that, there are conflicting data about the efficacy on early diagnosis and prognosis of EC in this population (10,14,15). This perception that endoscopic surveillance may not affect the prognosis of the neoplasia (10,33) makes it harder to homogenize a management and create surveillance guidelines de. Indeed, important societies such as the ISDE (22), the American Society of Gastrointestinal Endoscopy (ASGE) (34) and the American College of Gastroenterology (ACG) (35) do not recommend specific routine surveillance in these patients, only consider the possibility of endoscopy from 10 to 15 years of disease. Similar recommendations can be found in recent papers (15,36,37).

On the other hand, a risk of 0.3/year is comparable to the risk of Barrett esophageal malignancy without dysplasia (38) or low-grade dysplasia (39) and in these specific situation the surveillance is usually recommended. Despite the similar risks, the recommendations are different. First, achalasia is a much rarer condition than BE. While achalasia has an estimated incidence of 1 in 100,000 (40), BE can be present about 10% of GERD patients (41). Second, the EC can appear until 40 years after the initial symptoms of achalasia (1,15,18,19), and third BE has a modifiable precondition. These factors make the evidence more robust with better standardization and more evaluable efficiency.

Another important consideration is that EC has usually a late diagnosis in achalasia since dysphagia caused by the tumor may be attributed to the disease's own symptomatology. Thus, the majority of EC in achalasia is diagnosed in advanced stages, with poor prognosis (19,42,43).

Although there is no consensus it seems reasonable to consider endoscopic examination starting from the 10th year of onset of achalasia, every 3 to 5 years, especially in men, elderly, with Chagas' disease, or associated risk factors such as alcohol, smoking and endoscopic treatment for achalasia. However, some questions such as time to start surveillance, the time interval between exams, type of endoscopic technology (white-light, chromoendoscopy or narrow band imaging) and the need for serial biopsies remain unanswered. Further studies are needed for a more robust recommendation.

Achalasia is a recognized risk factor for EC, for both SCC and EAC. The patient must be informed about the risk of EC especially after 10 years, even treated. The treatment of achalasia with methods that increase risk of reflux (botulinum toxin injection, pneumatic dilation and per oral endoscopic myotomy) should be considered as a risk factor for EB.

Surveillance may be considered in patients with more than 10 years of disease, especially if associated with other risk factors.

We are indebted to Ms. Cathy Williams, Archives Services Manager from the Archives & Research Collections, King’s College London Archives for her kind attention and authorization to reproduce Figure 1.

Provenance and Peer Review: This article was commissioned by the the editorial office, Annals of Esophagus for the series “How Can We Improve Outcomes for Esophageal Cancer?”. The article has undergone external peer review.

Conflicts of Interest: All authors have completed the ICMJE uniform disclosure form (available at http://dx.doi.org/10.21037/aoe.2020.02.01). The series “How Can We Improve Outcomes for Esophageal Cancer?” was commissioned by the editorial office without any funding or sponsorship. FAMH served as the unpaid Guest Editor of the series. The authors have no other conflicts of interest to declare.