Esophageal cancer is a malignancy with the sixth highest mortality worldwide, and the incidence of esophageal adenocarcinoma (EAC), specifically, has increased 6-fold from 1975 to 2000 in the United States. Despite having a 4-fold improvement in survival rate over the past four decades due to improvements in diagnostic and therapeutic options, localized esophageal cancer continues to have an estimated survival rate of only 40% (1). Five-year survival rates rely heavily on the stage of esophageal cancer at the time of diagnosis as these rates decline from 39% with localized disease to 4% with distant metastases (2). Differentiation between T1a (muscularis mucosa invasion), T1b (submucosal invasion), and T2 (muscularis propria invasion) EAC is a critical determination for further management with either endoscopic resection (ER), surgical resection, or adjuvant chemoradiation therapy.

Currently, T1b lesions are treated with esophagectomy with lymphadenectomy with or without adjuvant chemotherapy rather than endoscopic therapy because of the significantly higher risk of lymph node metastasis (LNM) compared to T1a lesions, which are amenable to endoscopic treatment (2,3). LNM is the most important factor in determining the need for neoadjuvant therapy in patients with T1b EAC. T1b EAC involves LNM in 25–40% (3-5). Compared to T1N1, T2, or more advanced lesions that are treated with preoperative neoadjuvant therapy, T1bN0 lesions do not require preoperative or neoadjuvant therapy (6). Few studies have assessed the risk factors for LNM metastasis in T1b EAC patients with LNM found during follow-up after esophagectomy or ER. Lymph node size, grade, lymphovascular invasion (LVI), differentiation have all been reported as potential risk factors for LNM (7-11).

As endoscopic submucosal dissection (ESD), an en-bloc resection technique developed to improve curative resection rates of early gastrointestinal cancer, gains popularity in the West, it is critical to develop parameters for appropriate patient selection. ESD has been well established for the successful in the management of T1a cancers (12-14). Additionally, there might be several benefits of performing ESD in T1bN0 EAC patients as well. First, many patients pre-operatively staged as T1b actually have T1a cancer at time of pathology. This has been shown to be as high as 40% in gastroesophageal junctional (GEJ) cancers, (15) meaning, potentially up to 40% of patients could have curative resection after ESD. Additionally, not all T1b cancers have LNM. The risk of LNM maybe as high as 45% in SM3 tumors but is much less for SM1 (7.5%) and SM2 (10%), meaning a large number of patients will have curative resection after ESD (15,16). Hence, it is important to determine risk factors for LNM in T1bN0 tumors as adjuvant therapy (XRT, chemotherapy) can be tailored to those at highest risk of nodal metastasis after resection with ESD.

Given the high risk of LNM in T1bN0 lesions and the potential need for neoadjuvant therapy, the risk factors of T1b EAC patients must be further evaluated. In our study, we seek to evaluate the risk factors that led to LNM after esophagectomy or ER with at least 5 years of post-endoscopic follow-up.

This is a retrospective cohort study evaluating the risk factors for LNM in T1b EAC after esophagectomy or ER. This study was conducted at a single tertiary referral center. There was no funding for this study.

Patients were identified using a single-institution pathology database and medical records were retrospectively reviewed. Forty patients with histologically proven T1b EAC who underwent esophagectomy or ER with ≥5 years follow-up between 2010 and 2017 were identified. Routine follow-up was conducted after esophagectomy or ER with clinic visits, appropriate imaging, and endoscopy as per standard of care. Excluded patients included those who received: (I) chemoradiation prior to esophagectomy, (II) chemoradiation before or after ER, or (III) treatment for any other primary cancer within the preceding 5 years. The study was approved by the institutional review board.

Patients with LNM of T1b EAC after esophagectomy or ER were studied. LNM was considered positive if there was histologically or radiologically confirmed metastasis in esophagectomy specimens or in ER patients with a minimum of 5 years of follow-up. Data for risk factors of potential LNM were collected based on prior studies. This includes age, sex, LVI, tumor differentiation/grade, tumor macroscopic appearance, tumor location from the GEJ, tumor infiltration growth pattern, and history of Barrett’s esophagus. All pathologic specimens were reviewed by an expert gastrointestinal pathologist for T1b staging accuracy, LVI, differentiation, and depth of submucosal invasion.

All data were collected in a retrospective fashion from a single-institution database. Variables were measured by medians, means, interquartile ranges (IQR), and percentages. Comparisons between groups were performed with Wilcoxon rank-sum tests for numeric variables and with Chi-square tests of association for categorical variables. Univariable analysis was completed for single variable associations with LNM. Logistic regression was used to explore the possibility of multivariable models. As only seven subjects developed metastasis at 5 years, models only included up to two independent variables. Use of logistic regression modeling is justified as patients had at least 5 years of follow-up. A significant value of P<0.05 was used.

The patient population comprised of a total of 40 T1b EAC as described in Table 1. Of the total cohort, 36 patients (90.0%) underwent esophagectomy, while four patients, who were not surgical candidates, underwent ER with 5 years of follow-up data. A total of 7 patients out of 40 developed LNM. The average age at the time of procedure was 69 in those who did not develop LNM and 63 in those who developed LNM. Eighty-five percent (n=34) of the patient population were male. All patients who developed LNM were also male. 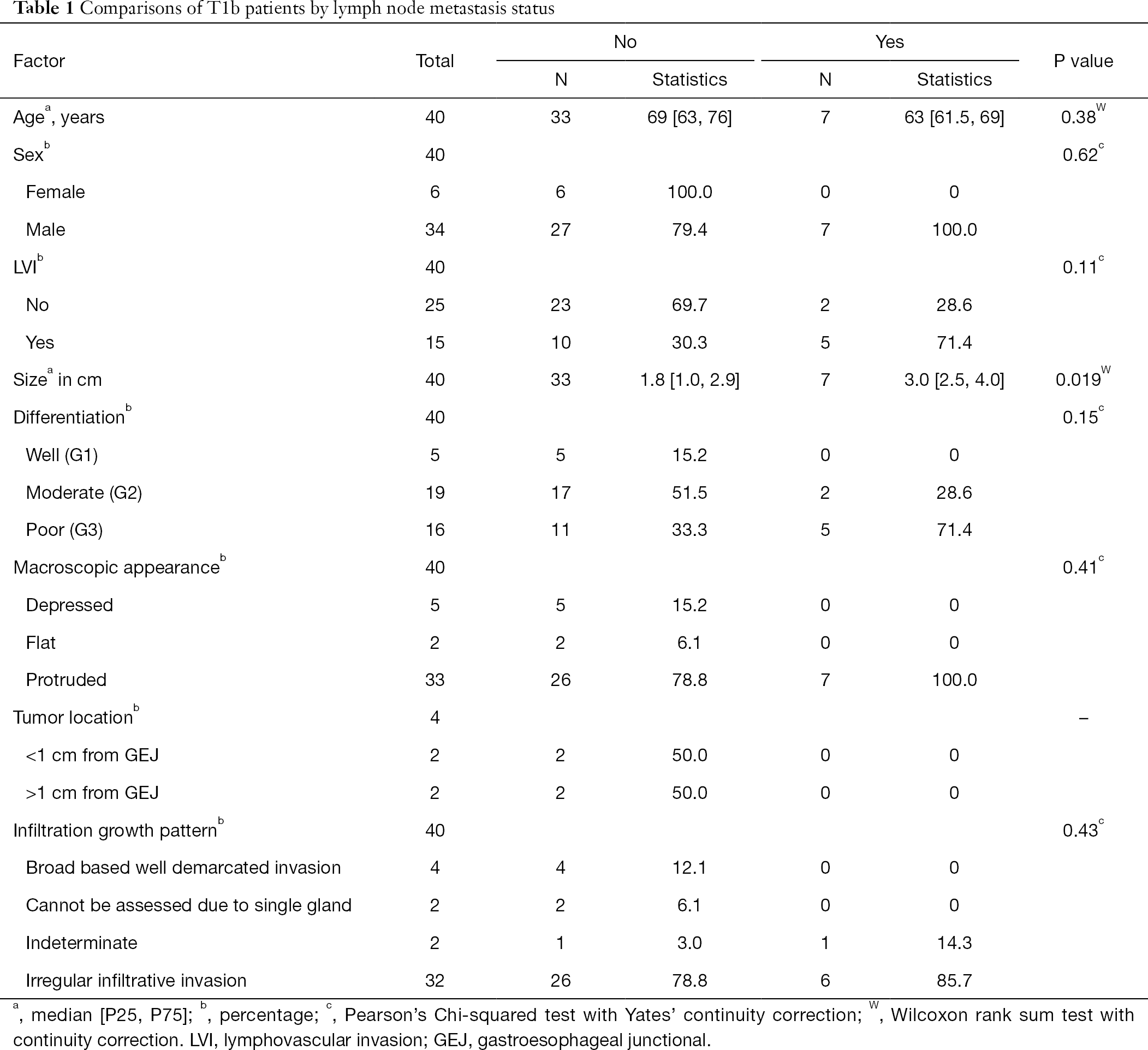 Tumor size was significantly (P=0.019) associated with risk of LNM for T1b EAC. This is described in Table 1. To determine the size cutoff associated LNM, a non-parametric receiver operating characteristic (ROC) curve was applied. The optimal threshold of 3 cm was found to be positively associated with metastasis (Figure 1). The other variables that were not statistically significant but should be noted to have a difference were LVI with a P value of 0.11 and differentiation with a P value of 0.14 in T1b EAC patients. 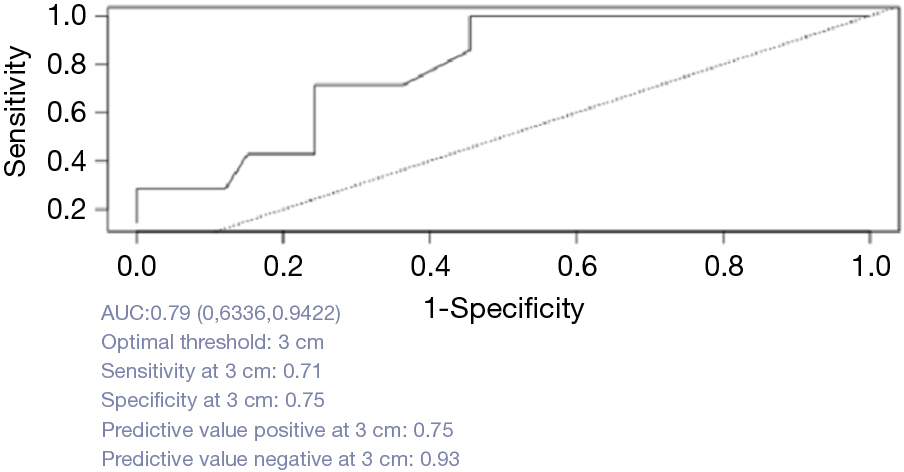 Figure 1 Non-parametric ROC curve at which size of the tumor is associated with metastasis. ROC, receiver operating characteristic.

T1b patients with LVI had larger tumor sizes with a median of 2.9 cm compared to a tumor size of 1.5 cm in those without LVI. The Wilcox test gives a P value of 0.001 for this comparison. For T1b patients, an optimal threshold size of ≥3 cm was a significant risk factor for LNM (Figures 1,2). 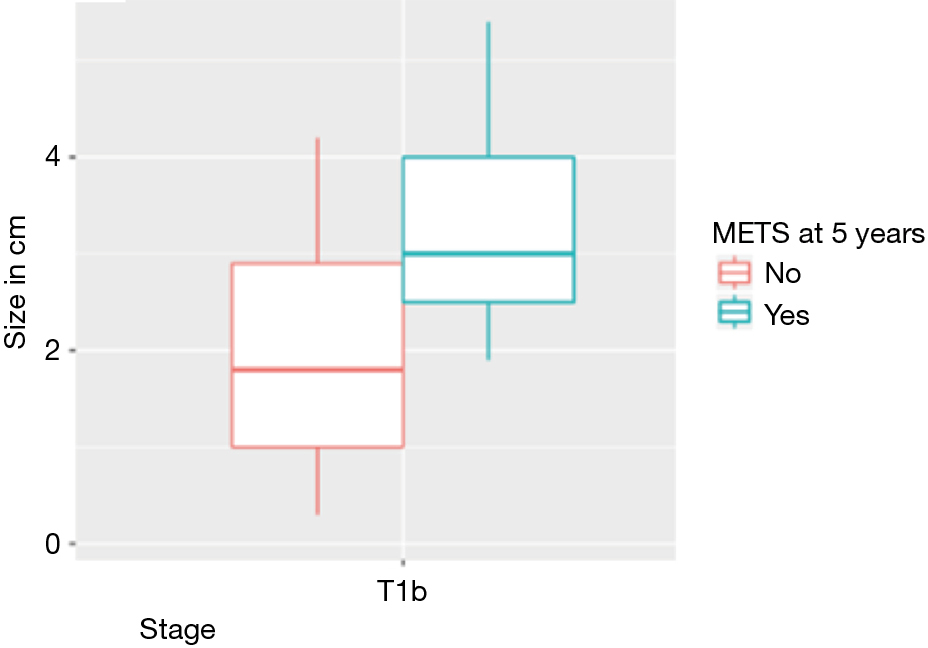 Given that LNM is a major determinant for the addition of neoadjuvant therapy in patients with EAC, there is a need to identify patients who would benefit the most from treatment. Currently T1a EAC patients are suggested to undergo ER, and T1b patients undergo esophagectomy due to the known high risk of LNM. The aim of the study was to determine risk factor associations of LNM in T1b EAC after esophagectomy or ER with 5 years of follow-up. The major implication was to determine candidate patients who may benefit from neoadjuvant therapy at the time of esophagectomy or ER based on these pertinent risk factors. In T1b EAC, tumor size greater than 3 cm is the variable with the most potential as a risk factor for metastasis following surgical or ER based on the study results.

Previous studies to assess risk factors associated with LNM have had varying results. Various potential predictors of LNM have been analyzed, including LVI, size of tumor, histologic differentiation (grade), macroscopic appearance, and tumor location with respect to the GEJ (7-11). There are conflicting reports on LVI as a prognosticator of T1b EAC (17,18). In a large multi-centered study, LNM risk based on histologic evidence of LVI, poor differentiation, or >500 µm submucosal SM depth of invasion from ER specimens showed that no single factor significantly increased LNM, but the risk of LNM was higher with these risk factors combined (15). The principal predictor of LNM in T1b lesions found by Sgourakis et al. was LVI (11). Invasion into the sublayers of the submucosa defined as SM1 (most superficial), SM2, and SM3 (deepest) had no association with LNM. Leers et al. found that LVI invasion, tumor size greater than or equal to 2 cm, and poor differentiation were associated with increased risk of LNM in T1 EAC (19).

Results from this study agree with most prior studies that size of tumor is a risk factor of LNM (8,9,10,17). However, our results differed from others that suggest LVI is a significant risk factor for LNM (8,9,17). According to our results, when LVI and size are analyzed as risk factors for LNM in EAC under a multivariable logistic regression model, LVI alone is not an independent risk factor. When size and LVI were combined under a multi-regression logistic model, size remained a significant risk factor, but LVI did not. This indicates that, in our cohort, the significance of LVI was driven by patients who had a larger tumor size. Ultimately, LVI likely does carry risk for LNM, but given the retrospective nature of our study, the limited sample size was not powered to effectively find LVI as a major risk factor.

Raja et al. have coined the esophageal submucosa as a “watershed area for esophageal cancer”. Their study found that as submucosal invasion increased, the risk of LNM also increased (20). Significant predictors of LNM in their study included LVI and larger cancers, those that are likely to invade more deeply. Similarly to Raja et al. , we found no other risk factors showing a statistically significant risk for LNM. Notably, although not statistically significant, moderately and poorly differentiated tumors contained all patients who developed LNM (5 with poorly differentiated tumors developed LNM and the other 2 had moderately differentiated tumors).

In the last decade, the potential and popularity for ESD has continued to grow in the West. Although most early stage esophageal cancer, such as T1a EAC, can be treated by endoscopic mucosal resection, ESD can be curative for large T1a lesions (>2 cm) or for lesions harboring superficial submucosal invasion (SM1, ≤500 µm). However, in patients with deeper submucosal invasion (SM2 and SM3), ESD can be utilized as a therapeutic option for non-surgical candidates. For experienced endoscopists attempting ESD, it is critical to determine the appropriate patient for ER. As the risk of LNM increases in T1bN0 EAC with deeper submucosal invasion, it is important to understand the factors that contribute to this risk. Our results corroborate with prior studies that well differentiated lesions without LVI and <3 cm have a low rate of LNM (21,22).

The study has strengths that include a long follow-up of at least 5 years after ER to study LNM metastasis and a large cohort of T1b EAC patients. Despite the strengths of the study, there are several limitations as well. This is a retrospective cohort study which carries with it the inherent biases of such a study design. Additionally, the sample of patients where the distance from the GEJ was recorded on surgical or endoscopic reports was very low (only 4 reported), making results of that data difficult to interpret. Future studies should include a larger sample size. Because LNM is a rare outcome, a case-control study design in the future may be a better study design to identify risk factors for LNM.

In conclusion, tumor size >3 cm was determined to be the greatest risk factor association for patients to develop LNM after esophagectomy or ER with >5 years of follow-up. Implications of this study may suggest that these patients should be considered for neoadjuvant therapy along with esophagectomy or ER.

Conflicts of Interest: Dr. Bhatt is a speaker for Aries Pharmaceuticals and a consultant for Medtronic. Neither are related to the content of this submission. The other authors have no conflicts of interest to declare.

Ethical Statement: The authors are accountable for all aspects of the work in ensuring that questions related to the accuracy or integrity of any part of the work are appropriately investigated and resolved. The study was approved by the institutional review board (No. 18-834). All procedures performed in studies involving human participants were in accordance with the ethical standards of the institutional and/or national research committee and with the 1964 Helsinki declaration and its later amendments or comparable ethical standards. For this type of study formal consent is not required.