Esophageal cancer can be either simultaneous or metachronous in accordance with field cancerization (1). Even after a superficial carcinoma is cured by endoscopic treatment, a risk of future metachronous primary carcinoma development in the patient’s esophagus remains. In fact, the frequency of multiple and metachronous esophageal cancers is reportedly from 12.5% (2) to 35.8% (3), indicating the importance of surveillance.

The mainstay of treatment for superficial esophageal cancer is endoscopic resection, which is minimally invasive and preserves the patient’s quality of life. Endoscopic submucosal dissection (ESD) is widely performed in Japan and other Asian countries and has become a part of routine clinical practice. The risk of a locoregional recurrence is minimal in lesions with a depth of up to T1a-lamina proper muscle (LPM), and the procedure can be considered curative (4). Detecting lesions at an early stage after a curative resection was performed as the initial treatment and achieving a curative resection during surveillance are important factors in achieving favorable outcomes, including long-term survival. However, there is no consensus on monitoring after endoscopic treatment of superficial esophageal cancer in terms of the monitoring interval. The ESD/endoscopic mucosal resection (EMR) guidelines for esophageal cancer (5) published in 2020 state that regular endoscopy is necessary to detect metachronous cancer not only in the esophagus but also in other organs and strongly recommend that endoscopy be performed at least every year. However, clinical data have not been analyzed to verify this recommendation, and no studies comparing outcomes during a monitoring period have yet been performed.

Clarifying monitoring methods regarding the interval may facilitate the early recognition of cancer and also have economic benefits by reducing the cost of all treatments through eliminating unnecessary examinations and treating patients at an early stage. Based on the previous reports (2,3,6), the interval of endoscopic examination was limited to be every 6 months or every 12 months. Therefore, the present study tested the hypothesis that a semi-annual endoscopy would contribute to a higher curative resection rate for superficial esophageal carcinoma than annual endoscopic examination. We present the following article in accordance with the STROBE reporting checklist (available at https://aoe.amegroups.com/article/view/10.21037/aoe-21-57/rc). 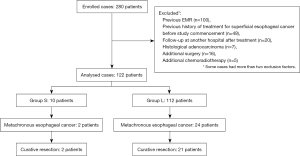 Endoscopic examination was carried out with white light and narrow band imaging (NBI) to search for secondary primary esophageal cancer. Iodine spraying was normally not performed, and a biopsy was performed only if necessary.

The primary endpoint was the percentage of secondary primary lesions that were curatively resected. The secondary endpoints were the frequency of metachronous superficial esophageal cancer and the lesion size.

The extent of Lugol-voiding lesions (LVL) was defined as Grade A for no LVL, Grade B for nine or fewer LVL, and Grade C for ten or more LVL, following the study by Katada et al. (6).

The study was conducted in accordance with the Declaration of Helsinki (as revised in 2013). The Institutional Review Board at Tokyo Metropolitan Cancer and Infectious Diseases Center, Komagome Hospital approved this study with a waiver of informed consent (IRB 2704).

Table 1 shows the clinicopathological characteristics of the cases. Group L had by far a larger number of cases (112 cases) than Group S (10 cases). There was no difference in terms of age or sex, and the extent of LVL was Grade C in 60% and 47% of patients in Groups S and L, respectively. There was no difference in the size, macroscopic type, location, or depth of the initially treated lesions.

Metachronous superficial esophageal carcinoma was detected in two patients in Group S and 24 patients in Group L (Table 3). The curative resection rate was 100% for Group S and 87.5% for Group L (P>0.99). The mean size of the lesions was 44.5 and 15 mm for the respective groups. Group S included two lesions 19 and 70 mm in size. The latter lesion was located in the cervical esophagus and was detected 13 months after the initial treatment. On the other hand, two lesions larger than 40 mm were observed in Group L in the upper and lower esophagus. The histological depth of both lesions was LPM, and 3.5 and 8 years had passed since their initial treatment. In terms of invasion depth, both lesions in Group S were T1a-epithelium (EP)/LPM whereas three lesions in Group L were T1a-muscularis mucosa (MM). One of the latter showed lymphovascular invasion and required additional CRT. Details of the latter lesion showed that its size was 11 mm and that it was detected about 1 month after the initial treatment. However, 8 months lapsed from detection to treatment because it was recognized as a T1a-EP lesion. The remaining MM lesions without lymphovascular invasion were about 10 mm in size and located in the upper esophagus and 18 mm in size and located in the middle esophagus. These lesions were treated within 2 months of detection. Among the lesions in Group L, surgical resection was performed in one case possibly because esophageal stenosis that developed after the initial treatment made using a therapeutic endoscope with an attached hood difficult, and the presence of multiple LVL suggested that the risk of multiple cancer development in the future was high.

The present study was conducted retrospectively based on the hypothesis that a monitoring period of 6 months would be necessary to detect metachronous superficial esophageal carcinomas, and that the non-curative resection rate may increase if endoscopic examination is performed at longer intervals. Three cases of non-curative resection were observed in Group L only. The number of cases in Group S was so small that statistical comparison was not applicable, However, detailed analysis showed that other factors also contributed to this result, such as instances in which a lesion was overlooked, underestimation of lesion depth, and a prolonged interval between detection and treatment. Due to the retrospective nature of the study, some details remained unclear while certain factors, such as the surveillance interval and the endoscopists’ skills, may have had a significant impact on the curative resection rate for the secondary primary lesions.

There are few reports examining metachronous esophageal cancer detected during surveillance. Urabe et al. (2) studied 96 patients who were followed up and found 12 cases of metachronous esophageal cancer (12.5%) in 12 patients. Six patients had lesions less than 10 mm in size, and one patient had a lesion greater than 50 mm. The depth of each lesion, the treatment method, curability, and the surveillance interval were not described, and the study concluded only with a recommendation of an annual endoscopy. According to Yokoyama et al. (3), 29 of 89 EMR cases were found to have secondary primary esophageal carcinoma; 20 had EP lesions, eight had LPM-MM lesions, and one had a submucosa (SM) carcinoma. Surveillance in this study consisted of endoscopy with iodine staining every six months. In contrast, in a cohort study of prospectively 330 patients with semi-annual surveillance endoscopy (7), 74 (22.4%) were found to have metachronous esophageal cancer; 72 were treated with endoscopic resection, and two of these were treated with CRT because of possible SM invasion at the time of detection. These two patients received additional CRT after a case of MM with positive lymph vascular invasion and a case of SM invasion came to light. In addition, Berger et al. (8) performed annual endoscopic surveillance in 136 patients with ESD and found eight novel cases of early-stage esophageal cancer. Four of these patients underwent ESD, and one patient underwent CRT, but no details were provided. Given these circumstances, despite there being a few cases of failure to achieve a curative resection, endoscopy with iodine staining enabled detection of early-stage, novel lesions and thereby contributed to a higher cure rate.

Several studies have investigated the relationship between LVL and metachronous cancer. Katada et al. (6) analyzed 330, prospectively enrolled patients who underwent Lugol chromoendoscopy at 3-month intervals up to 6 months after EMR or ESD. Subsequently, the examinations were repeated every 6 months. Grade C patients with more than ten LVL had a 2-year cumulative incidence of multiple metachronous squamous cell carcinomas (esophagus: 4.0%, 9.4%, and 24.7%; P<0.0001 for A or B vs. C; respectively). Other reports similarly found metachronous esophageal cancer with multiple LVL. In the present study, 100% of patients in Group S and 79.2% of patients in Group L were Grade C.

On the basis of the relationship between the grade of LVL and metachronous esophageal cancer, the surveillance interval should be determined according to the risk level, i.e., 6 months for Grade C patients with a high risk of new esophageal cancer development and 1 year for Grade A patients. This method warrants further examination in the future after data from more cases is accumulated.

Previous studies of surveillance periods have allowed EMR as an option for the first lesion. However, with EMR the risk of local recurrences increases as the lesion size increases (9). Since it is obvious that the local recurrence rate is higher when piecemeal resection is done (10), the frequency of endoscopic examinations may be increased to detect local recurrences. Thus, setting a surveillance interval to detect new esophageal cancer in patients with a piecemeal EMR is not advisable, and the present study excluded patients with a history of EMR.

The present study has some limitations. First, it was a monocentric, retrospective study enrolling a small number of cases. Second, the surveillance interval was determined by the attending physician based on various circumstances and may therefore have introduced some biases.

In conclusion, a monitoring interval of 6 months after ESD for esophageal superficial carcinoma might still be more practical than 1 year.

Reporting Checklist: The authors have completed the STROBE reporting checklist. Available at https://aoe.amegroups.com/article/view/10.21037/aoe-21-57/rc

Conflicts of Interest: All authors have completed the ICMJE uniform disclosure form (available at https://aoe.amegroups.com/article/view/10.21037/aoe-21-57/coif). TI serves as an unpaid editorial board member of Annals of Esophagus from April 2020 to March 2022. The other authors have no conflicts of interest to declare.

Ethical Statement:The authors are accountable for all aspects of the work ensuring that questions related to the accuracy or integrity of any part of the work are appropriately investigated and resolved. The study was conducted in accordance with the Declaration of Helsinki (as revised in 2013). The institutional review board at Tokyo Metropolitan Cancer and Infectious Diseases Center, Komagome Hospital approved this study with a waiver of informed consent (IRB 2704).