Achalasia is the most common primary motility disorder of the esophagus with an incidence of 1 per 100,000 (1). The main symptoms are weight loss, dysphagia, regurgitation, and chest pain. Achalasia is defined by the presence of elevated integrated relaxion pressure and is divided into subtypes according to the different patterns of non-peristaltic esophageal pressure (2). Conventional manometry has been used to evaluated disorders mainly of the esophageal body and lower esophageal sphincter (LES), but with the advent of high-resolution manometry (HRM) the upper esophageal sphincter (UES) became of interest in the last years (3) and now has its value in the pathophysiology of achalasia as well.

The objective of the article is to review of the alterations of UES in the achalasia under the optics of HRM. We present the following article in accordance with the Narrative Review reporting checklist (available at https://aoe.amegroups.com/article/view/10.21037/aoe-21-14/rc).

The research has been done from PubMed with the following key words: upper esophageal sphincter, achalasia, and high-resolution manometry. Only articles written in English performed on adult humans were selected for primary review. The references of the articles were manually reviewed for additional relevant papers.

Basal pressure of the UES can vary (ranging from hypotensive, normotensive, to hypertensive) according to the esophageal pressurization (4-8), that represents in fact subtypes of achalasia according to the Chicago Classification (2) (Figure 1). Subtypes with esophageal pressurization (achalasia type II and III) usually present with elevated basal pressure of the UES when compared to the non-pressurized subtype (achalasia type I) (4,6,8). 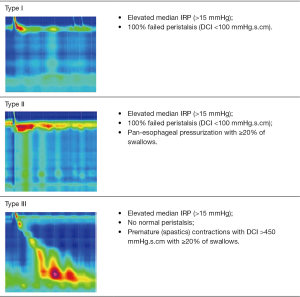 The residual pressure of UES is elevated in achalasia patients, but in patients with esophageal pressurization this value is even bigger (Figure 2) (4,6,8). 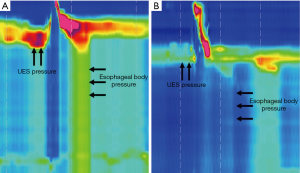 This increase of the basal and residual pressures of UES in achalasia are related the reflex mechanism of esophagus to decrease the aspiration of undigested food and saliva (4,6).

The swallowing and UES in patients with achalasia

Patients with achalasia have decreased esophageal clearance due to progressive myenteric neuron loss, what promote decreased of LES relaxation and aperistalsis (9,10). In addition, there is an increase of residual pressure of the UES and higher thoracic pressure, which increase the esophageal pressure (8). In order to overcome this hostile environment, the patient with achalasia involuntarily performs an effortful swallowing characterized by short pharyngeal contractions that are also hypertonic and premature in relation to UES relaxation, aiming to facilitate the transport of the bolus into the stomach (4).

The importance of UES in esophageal pressurization

As second theory, esophageal pressurization is not caused by muscular contraction because: (I) pressure are the identical along the whole extension of the wave, the muscles can not to contract with such precision; moreover, the contraction transition zone is absent; (II) the esophagus is denervated, even so may induce tertiary spontaneous contractions; waves coordinated with deglutition are not feasible; but, idiopathic achalasia may conserve excitatory nerves allowing spastics contractions (type III achalasia); (III) shortening of the esophagus does not appear in HRM (8). In this case, the UES plays an important role in the genesis of pressurized waves, with interaction thoracic pressure allowing the pressurization and promoting esophageal emptying. The UES basal and residual pressure is hypertonic to sustain the higher thoracic pressure, and an effortful swallow with decreased relaxation increase even more the esophageal pressure, in a fluid-filled esophagus. These unconscious reflexes may help to force the food into the stomach overcoming a non-functional barrier at the esophagogastric junction (8). This mechanism is changed after treatment of achalasia (5,11-13).

The UES after treatment of achalasia

The outcomes of achalasia treatment are related to Chicago Classification. Type II achalasia has a better prognosis compared the type I and III (14). Some studies suggest that abnormalities of UES (hypertonia and high residual pressure) in patients with achalasia determine a poor prognosis of the treatment. These authors think that the poorer response is associated abnormalities of the UES, that are due to a compensatory and protective effect in consequence of inadequate esophageal emptying and regurgitation, that occur mainly in cases of advances diseases (12,13).

Provenance and Peer Review: This article was commissioned by the editorial office, Annals of Esophagus for the series “Upper Esophageal Sphincter”. The article has undergone external peer review.

Conflicts of Interest: All authors have completed the ICMJE uniform disclosure form (available at https://aoe.amegroups.com/article/view/10.21037/aoe-21-14/coif). The series “Upper Esophageal Sphincter” was commissioned by the editorial office without any funding or sponsorship. FAMH served as the unpaid Guest Editor of the series and serves as an unpaid editorial board member of Annals of Esophagus from September 2020 to August 2022. The authors have no other conflicts of interest to declare.