McKeown esophagectomy is a well described procedure with right thoracotomy, upper abdominal laparotomy, and cervical anastomosis by left cervicotomy. In Brazil, most esophageal carcinoma cases are squamous cell type; 77% of esophageal carcinomas in Brazil. These cases require an extended proximal margin of the esophagus justifying the cervical location of the anastomosis. In the last 15 years, our institution has moved to minimal invasive procedures for thoracic tumor resection and lymphadenectomy via thoracoscopic approaches (1). This has reduced the morbidity from 62% to 42.5% (2). The transhiatal approach was introduced to Brazil 1977 by Prof. Henrique Walter Pinotti, and the absence of thoracotomy reduced the respiratory complication from 28% to 12% versus the thoracoscopic approach. Over 40 years, we experienced a reduction of morbidity and complications related to the magnitude of the procedure. We always performed cervical anastomosis in systematic way; unfortunately, we noted the same rate of anastomotic leakage (around 15%) (3).

The McKeown procedure involves three parts: (I) the thoracic part is mostly esophageal dissection with inferior mediastinal, infra-carinal, bilateral peri-bronchial, para-tracheal and recurrent lymphadenectomy (extended two field dissection), (II) left cervical incision involves dissection of cervical esophagus and cervical anastomosis; (III) the abdominal part is after gastric mobilization (preservation of main vessels from the great curvature of stomach) and proceeds the lymphadenectomy around the common hepatic artery, proper hepatic artery, and left gastric vessels. Finally, gastroplasty is performed with proximal gastrectomy and a thin gastric tube. We then perform a gastric pull-up through the posterior mediastinum to cervical location after left cervicectomy. The location of the esophagogastric anastomosis is correlated to step 1. Extension of oncological margins is important in resection particularly in middle esophageal squamous cell carcinoma. The proximal margin requires cervical location anastomosis after esophagectomy. The Surgeon’s option of surgical approaches for esophagectomy is mainly based on his/her experienced related with post-operative complications. Several techniques have been described for cervical anastomosis such as hand-sewn, circular stapled, linear stapled, isoperistaltic, or anisoperistaltic; however, none of these is superior one.

All procedures performed in this study were in accordance with the ethical standards of the institutional and/or national research committee(s) and with the Helsinki Declaration (as revised in 2013). Written informed consent was obtained from the patients.

The patient was placed in a prone position after peridural catheter anesthesia and a selective intubation of the left source bronchus. Five trocars were positioned as shown in Figure 1. The first 12 mm was introduced in the lower limit of the right scapula and the others were placed under direct vision and after using positive intrathoracic pressure of 8 mmHg CO2. Thus, four more trocars (two 10 mm and two 5 mm) were positioned—four of them along a semicircular line going from the medial edge of the scapula to the right posterior costal margin. The fifth trocar was positioned close to the column at the midpoint of this line (Figure 1). 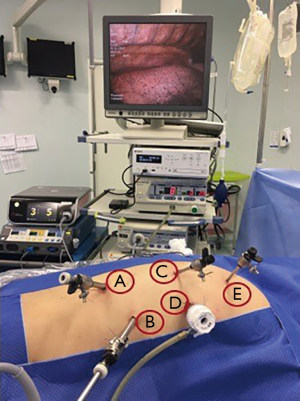 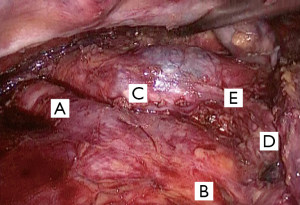 This was followed by isolation and sectioning via a mechanical suture of the azygos vein stem with a 60-mm endoscopic mechanical stapler with a vascular charge device and dissection towards the upper third of the thoracic esophagus. There was concern about clipping the thoracic duct at its origin near the right diaphragmatic pillar and near the intercostal vessels to avoid post-operative chylothorax.

The proximal esophagus and supra-carinal periesophageal lymph node stations were dissected including para-tracheal and recurrent stations. The final aspect is demonstrated in Figure 3. 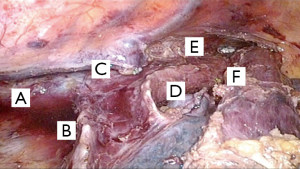 After complete dissection of the thoracic esophagus, the thoracic drain was positioned through the orifice of the most distal trocar. This followed by closing the ports and repositioning the patient in the horizontal supine position; the face was turned to the right side for left cervicectomy.

The stomach was liberated at the great curvature preserving the vessels from the gastroepiploic vessels. The small curvature was dissected by ligating the left gastric vessels. Gastroplasty (making the isoperistaltic gastric tube) was performed with manual staplers. We began stapling in the antrum via the lesser curvature and moved towards the greater curvature. We made a slim gastric tube to create an anastomosis in the cervical esophagus and emptied it properly.

The abdominal part was performed via the “hand-assisted” technique (laparoscopic dissection and stapling by small right subcostal incision). Cervical procedures were similar to those described in open transhiatal esophagectomy.

The digestive track was reconstructed with esophagogastric latero-cervical anastomosis with mechanical stapling and re-enforcement with separate prolene 3.0 points. This was followed by cervical drainage with a thin Penrose drain, platysma layer closure, subcutaneous tissue, and skin. No omental patch or device was used to avoid anastomotic leakage (Figure 4). 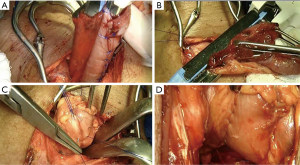 During the cervical anastomosis, a nasoenteric tube was allocated after the pylorus (laparoscopically assisted); eight days later, we performed an X-ray contrasted swallow ionic-liquid-contrast (no barium) as shown in Figure 5. 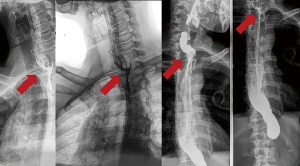 Between 2009 and 2019, more than 345 esophagectomy cases with cervical anastomosis were performed, and fistula was diagnosed in 46 of them (13.3%). The spontaneous preferred locations of the liquid drainage after leakage were cervical (38/46, 82.6%), upper mediastinum (4/46, 8.7%), and all mediastinum with mediastinitis (4/46, 8.7%). The median time of clinical occurrence was 5.6 [2–8] days; moreover, only two cases developed clinical fistula even with a negative result after swallowing X-ray contrast. We did not systematically perform an upper endoscopy to evaluate the size of the defect in the anastomosis; rather, we performed endoscopy for dilatation of the anastomosis in cases after refractory healing after 14 days. We could only estimate the occurrence of proximal necrosis (partial) of the gastric pull-up and anastomosis in four (8.7%) cases and one case (2.1%) of total necrosis of the gastric tube (in a patient with previous liver transplantation).

Anastomosis leakage is still one of the most severe complications after esophagectomy. It increases the mortality, number of days of hospitalization, and the risk of other postoperative complications such as pneumonia, acute respiratory distress syndrome, cardiac arrhythmia, renal failure, sepsis, and others. The mortality rate related to anastomosis dehiscence has decreased in recent years thanks to improved surgical techniques, interventional radiology (percutaneous drainage), the use of minimally invasive techniques and better selection of patients (4). Kamarajah et al. demonstrated that patients with anastomotic leak were associated with a significantly longer stay in critical care and also longer hospitalization time, but they do not have compromised long-term outcomes and are unlikely to have a detrimental oncological impact (5). Identifying the risk factors for esophageal leak may help to decrease post operatory morbidity and mortality or better optimize patients to reduce the postoperative complications.

Markar et al. published a systematic review and meta-analysis to analyze the main technical parameters that impact anastomotic integrity; cervical anastomosis was the only factor analyzed that increased the risk of leak. The choice of the anastomosis technique (hand-sewn versus stapled esophagogastric anastomosis), the surgery approach (minimally invasive versus open esophagectomy), and the route of reconstruction (Anterior Versus Posterior Mediastinal Reconstruction) were not risk factors for anastomosis leak (9). This suggests that the longer distance that the blood supply must travel for anastomotic healing in the neck compared with an intrathoracic approach is correlated with a greater chance of leak. Another important fact that seems to correlate with the chance of anastomotic leak is the anastomosis’s perfusion and the patient’s clinical comorbidities (which are also indirectly related to anastomosis vascularization). There is no statistical difference in the anastomotic leakage rate in cervical and transthoracic cases in the benchmark group (patients with low comorbidities) (10).

In this context (perfusion influences cervical anastomosis healing), we developed alternatives that improved the vascularization of the anastomosis. Akiyama et al. used a method called gastric conditioning where they embolized the principal feeding arteries of the stomach (the left and right gastric arteries as well as the splenic arteries weeks before esophagectomy) to allow the gastroepiploic arteries to develop collaterals and reduce the incidence of ischemia of the gastric conduit. However, the leak rates were similar to the others patients (11).

Another interesting strategy is the supercharge techniques in which two vascular anastomoses (microsurgical or not) are performed between an arterial and venous branch of the gastro-omental arch and a neck vessel—usually a branch of the external carotid arteries and external jugular vein. This technique improves the perfusion of the gastric tube and decrease the risks of the anastomosis leakage. Yoshimi et al. had a significantly lower anastomotic leakage in the supercharge group than in the control group (12).

Provenance and Peer Review: This article was commissioned by the Guest Editor (Alejandro Nieponice) for the series “Anastomotic Techniques for Minimally Invasive Esophagectomy and Endoscopic Handling of Its Complications” published in Annals of Esophagus. The article has undergone external peer review.

Conflicts of Interest: All authors have completed the ICMJE uniform disclosure form (available at https://aoe.amegroups.com/article/view/10.21037/aoe-21-11/coif). The series “Anastomotic Techniques for Minimally Invasive Esophagectomy and Endoscopic Handling of Its Complications” was commissioned by the editorial office without any funding or sponsorship. The authors have no other conflicts of interest to declare.

Ethical Statement: The authors are accountable for all aspects of the work in ensuring that questions related to the accuracy or integrity of any part of the work are appropriately investigated and resolved. All procedures performed in this study were in accordance with the ethical standards of the institutional and/or national research committee(s) and with the Helsinki Declaration (as revised in 2013). Written informed consent was obtained from the patients.