Locally advanced esophageal cancer is mostly treated by chemo(radio)therapy followed by radical esophagectomy with lymphadenectomy (1). After esophagectomy, a gastric conduit reconstruction with an intrathoracic or cervical anastomosis is usually made. Although extensive efforts have been made to identify the optimal anastomotic technique in esophagectomy, the incidence of anastomotic leakage remains about 15–20% (2). Previous studies comparing hand-sewn versus stapled anastomotic techniques have been inconclusive (3-5).

To construct an intrathoracic anastomosis during esophagectomy, a hand-sewn, linear stapled, or circular stapled technique can be applied (6). With the increasing use of minimally invasive surgery and number of surgeons adopting the Ivor-Lewis approach for mid to distal esophageal tumors, a stapled anastomosis has become the standard of care for conventional minimally invasive esophagectomy (MIE) (7). However, articulating robotic instruments improve the surgeon’s dexterity and facilitate the construction of a hand-sewn intrathoracic anastomosis in robot-assisted minimally invasive esophagectomy (RAMIE). In our center, this technique was introduced in 2016 and refined during the subsequent years (8). The aim of this study was to describe our current technique and evaluate the outcomes of patients who underwent RAMIE with this type of robot-assisted hand-sewn intrathoracic anastomosis. We present the following article in accordance with the STROBE reporting checklist (available at https://aoe.amegroups.com/article/view/10.21037/aoe-20-98/rc).

Patients were selected from a prospectively maintained database of the University Medical Center Utrecht. Patients who underwent a RAMIE with an intrathoracic hand-sewn anastomosis between 1 November 2019 and 1 November 2020 were included in the current retrospective study. A hand-sewn anastomosis was standard of care for all patients who underwent Ivor-Lewis. This inclusion period was chosen because the aim of this study was to evaluate the outcomes of the current anastomotic technique after previously reported refinements (8). This anastomotic technique was uniformly applied throughout the consecutive cases.

The study was conducted in accordance with the Declaration of Helsinki (as revised in 2013). The study was approved by institutional ethical board of the University Medical Center Utrecht (No. 13-061) and the need for informed consent was waived.

All patients underwent fully robotic RAMIE (i.e., robotic surgery during both the abdominal and thoracic phase) with extended two-field lymphadenectomy (including mediastinal stations 2 and 4), gastric conduit reconstruction with intrathoracic anastomosis. The technical steps of the thoracic phase of the RAMIE procedure were described in detail in a previous publication (9). All surgeries were performed by 2 surgeons who have RAMIE experiences since 2003 and 2011 respectively and perform RAMIE procedures with an intrathoracic hand-sewn anastomosis since 2016 and onwards.

In general, the anastomosis was constructed at the level, just above the azygos vein, guided by tumor location. 7.5 milligram indocyanine green (ICG) was injected and visualized by fluorescence Firefly technology (Intuitive Surgical Inc., Sunnyvale, CA) to evaluate the vascularization of the gastric conduit and determine the exact anastomotic site at the gastric conduit (Figure 1). 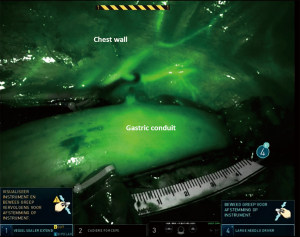 Figure 1 Determining the location of the anastomosis in the gastric conduit with indocyanine green during RAMIE. RAMIE, robot-assisted minimally invasive esophagectomy.

The incision is approximately 1–2 centimeters and made with a Cautery Hook parallel to the longitudinal gastric stapler line. The location in relative to this staple line is halfway in the gastric conduit, slightly near the omentum.

The anastomosis was performed with an end-to-side construction (Figure 2). A barbed V-Loc 4.0 suture was used to close the posterior wall by a single-layer running hand-sewn technique. The space between the bites was aimed to be around 5mm. In a similar way, the anterior wall was sutured with a separate barbed V-Loc 4.0. When the anastomosis was almost closed, a nasogastric tube was inserted and positioned under vision. The sutures were secured by sewing the V-Loc in backward direction. 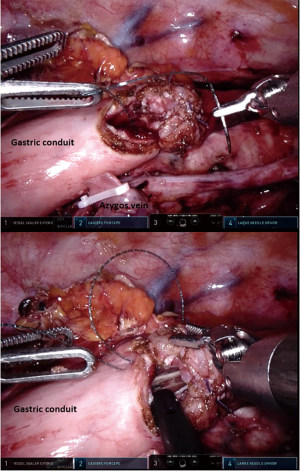 Figure 2 Closure of the posterior and anterior wall of the anastomosis during RAMIE with a running barbered suture. RAMIE, robot-assisted minimally invasive esophagectomy.

To avoid traction on the running sutures of the anastomosis, 3–4 tension releasing mattress stitches were placed as an overlay to approximate the esophageal wall to the gastric wall (Figure 3). For this step a Vicryl 3-0 suture was used. 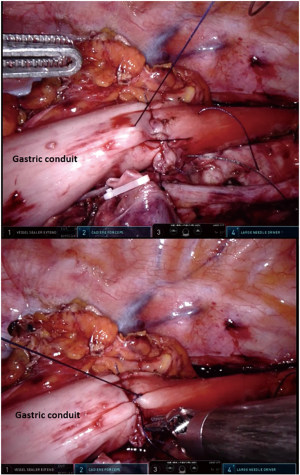 In all cases an omental wrap was applied. To avoid possible twisting of the gastric conduit, this was not performed in a circular fashion, instead the omentum was only fixed on the anterior wall of the anastomosis. Care was taken to position the gastric conduit in the esophageal bed.

An enhanced recovery after esophagectomy protocol was used for the postoperative management and did not change during the inclusion period. Generally, all patients received epidural or paravertebral anesthesia. The epidural or paravertebral catheter was removed on postoperative day 3. During surgery, 2 Jackson Pratt drains were inserted bilateral in the thoracic cavity. Only if indicated a large caliber thoracic drain was left behind (i.e., pulmonary damage). The Jackson Pratt drains were usually removed when the production was less than 200 milliliters per 24 hours. The nasogastric tube remained until the contrast imagine was performed at postoperative day 4. The aim of this contrast imagine is to look for delayed gastric emptying and vocal cord dysfunction or aspiration. If this was not the case, the nasogastric tube was removed at postoperative day 4 and the patient could start with water intake. A jejunostomy feeding tube was routinely placed, as oral intake was prohibited until postoperative day 4 and carefully resumed from then onward.

Data was analyzed using SPSS 25.0 (IBM). Only descriptive analyses were performed. Continuous outcomes were shown as a median with range or mean with standard deviation, depending on data distribution. Categorical data were shown as numbers with percentages.

Between November 2019 and November 2020, 22 consecutive patients who underwent RAMIE with an intrathoracic hand-sewn anastomosis were included. The patient characteristics and outcomes are shown in Table 1. The total time to complete the anastomosis, measured from the incision in the gastric conduit until the omental wrap was finished, was a median of 37 minutes (range, 25–48 minutes). Closing the posterior and anterior wall took a median of 23 minutes (range, 16–32 minutes). Out of 21 patients, 3 patients developed anastomotic leakage (14%). These cases involved a grade I leak in 2 patients (9%) and a grade III leak in 1 patient (5%). A Grade 1 leak was treated with antibiotics and nil per mouth. The patient with a grade III leak required a reoperation. In-hospital mortality occurred in 1 patient (5%), which was caused by massive aspiration. The median length of hospital stay was 9 days (6-20).

*, from incision in gastric conduit till the omental wrap was finished.

The hand-sewn robot-assisted anastomosis has several benefits. Foremost, the currently presented technique allows the construction of a fully robotic intrathoracic anastomosis, which does not require the surgeon to step away from the console to the table for the introduction of a circular stapling device through a mini-thoracotomy. The hand-sewn approach does not necessitate the presence of an experienced bedside assistant for the construction of the anastomosis which contributes to the surgeons’ autonomy. Furthermore, a hand-sewn anastomosis allows the surgeon to construct a tailored anastomosis which can be easily adapted to the individual patient, particularly in terms of the anastomotic site, size and the ensuing tension on the anastomosis. Although a hand-sewn anastomosis is harder to standardize than the (semi-)mechanical alternatives, increased control may provide benefits in the hands of an experienced surgeon.

The success of an anastomotic technique is multifactorial making every detail count. However, we consider several refinements as essential contributors to the current technique. Firstly, using tension releasing stitches appears to lead to the right balance of tension on the anastomosis. Secondly, the vascularization of the anastomosis is of importance. Factors such as location in the gastric conduit and type of suture (V-Loc 4.0) have furthermore contributed to our anastomotic technique.

In conclusion, the currently presented technique for robot-assisted hand-sewn intrathoracic anastomosis is safe and feasible for achieving an anastomotic leakage rate of 14% in our most recent cohort of patients who underwent RAMIE. In our experience, the most important technical aspects include the location of the anastomosis and the right balance of tension on the anastomosis.

Provenance and Peer Review: This article was commissioned by the Guest Editor (Alejandro Nieponice) for the series “Anastomotic Techniques for Minimally Invasive Esophagectomy and Endoscopic Handling of Its Complications” published in Annals of Esophagus. The article has undergone external peer review.

Reporting Checklist: The authors have completed the STROBE reporting checklist. Available at https://aoe.amegroups.com/article/view/10.21037/aoe-20-98/rc

Conflicts of Interest: All authors have completed the ICMJE uniform disclosure form (available at https://aoe.amegroups.com/article/view/10.21037/aoe-20-98/coif). The series “Anastomotic Techniques for Minimally Invasive Esophagectomy and Endoscopic Handling of Its Complications” was commissioned by the editorial office without any funding or sponsorship. RvH and JPR report that they are proctors for Intuitive Surgical Inc. and are consultants for Medtronic. The authors have no other conflicts of interest to declare.

Ethical Statement: The authors are accountable for all aspects of the work in ensuring that questions related to the accuracy or integrity of any part of the work are appropriately investigated and resolved. The study was conducted in accordance with the Declaration of Helsinki (as revised in 2013). The study was approved by institutional ethical board of the University Medical Center Utrecht (No. 13-061) and the need for informed consent was waived.