Unusual approach for treatment of esophageal cancer in a patient with right-sided aortic arch: a case report

Esophageal cancer (EC) is an aggressive cancer which ranks sixth among all cancer mortality in 2013 (1). The main histological types of EC are squamous cell cancer and adenocarcinoma with the former being the leading type globally and the latter being the leading type in western countries. Squamous cell cancer of the esophagus is most commonly related to tobacco and alcohol consumption. With the rise in the prevalence of obesity in the western world, the incidence of esophageal adenocarcinoma has also risen. This maybe secondary to the increased intraabdominal pressure worsening gastroesophageal reflux (2).

Esophagectomy remains the primary treatment for local EC. However, esophagectomy has the highest mortality rate among all elective gastrointestinal surgical interventions, ranging from 8–23% (3) and a 50% morbidity rate (4). Major complications of the surgery include anastomotic leak into the thorax which may lead to mediastinitis and sepsis. Advancement in surgical techniques and improved postoperative care by a multidisciplinary team has resulted in improvement in outcome rates (5).

The most common surgical approaches are transthoracic esophagectomies and transhiatal esophagectomy. Transthoracic esophagectomy typically involves a right-sided thoracotomy or thoracoscopy to avoid the aortic arch lying adjacent to the esophagus. We report a case of a patient with EC with a right-sided aortic arch. In this case the right aortic arch was discovered during preoperative computerized tomography (CT) scan imaging of the esophageal carcinoma. This anatomical variant prompted a planned surgical approach for esophagectomy through the left side of the chest. We present the following case in accordance with the CARE reporting checklist (available at http://dx.doi.org/10.21037/aoe-19-47).

A 68-year-old male with past medical history of chronic obstructive pulmonary disease, cerebrovascular accident, prior tobacco use presented with difficulty swallowing for the past 3 months. He had a barium swallow study that showed a stricture in the distal esophagus. Esophagogastroduodenoscopy (EGD) showed a distal esophageal tumor that was circumferential and partially occluding the lumen. Biopsy of the tumor revealed adenocarcinoma of the esophagus. Endoscopic ultrasound was attempted but exam was limited as it was not possible to pass the scope beyond the proximal part of the tumor. The proximal tumor was staged as at least T2 with involvement of muscularis propria. CT scan of the chest and abdomen along with PET scan showed no metastasis or lymph nodes involvement. The scans also picked up an incidental finding of a right-sided aorta arch.

The patient’s case was discussed at multidisciplinary tumor board with recommendation of neoadjuvant chemoradiation and esophagectomy. The patient completed neoadjuvant chemo-radiation therapy. The surgical team had decided to proceed with an esophagectomy with a left-sided approach given the presence of a right-sided aorta arch. Three-dimensional (3D) reconstruction of the descending aorta is shown in Figure 1. 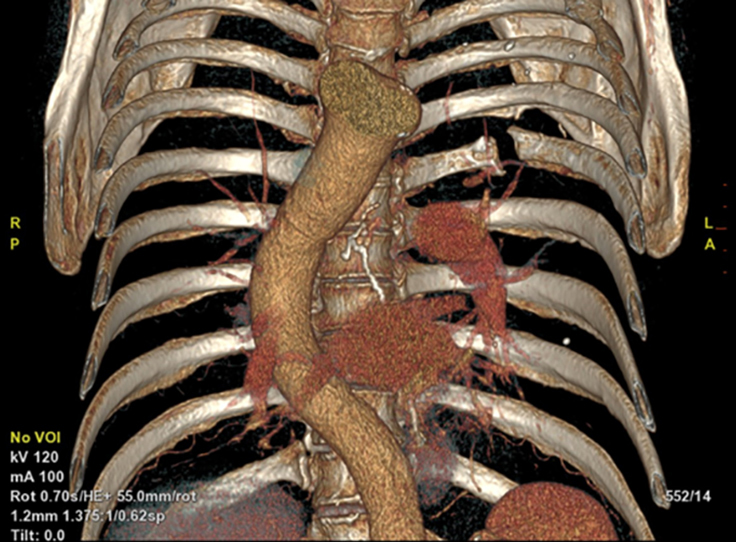 The surgery started with the intent of a left-sided thoracoscopic minimally invasive esophagectomy however it was decided to convert to a left open thoracotomy for better visualization and access to the surgical field.

Pathology from the surgical specimen showed no evidence of residual tumor. The margins were clear and there was no lymphovascular invasion. AJCC pathological stage was yTXN0. CT chest obtained after esophagectomy are shown in Figures 2,3. 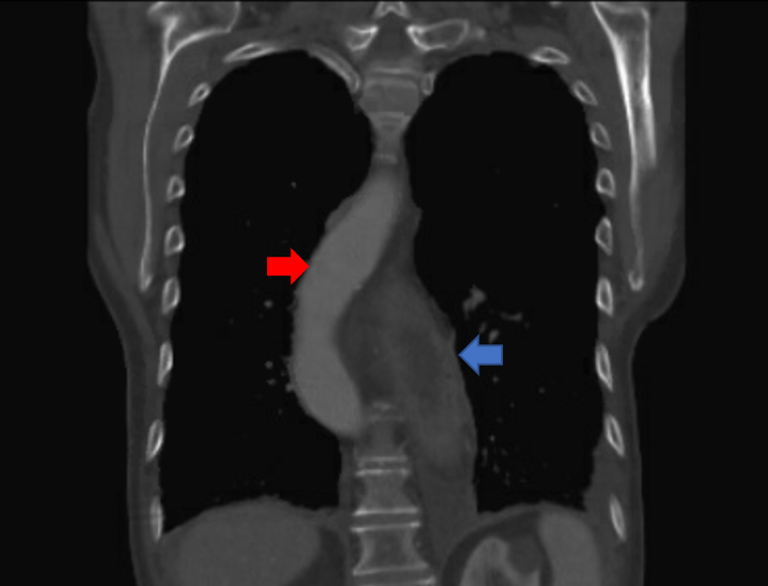 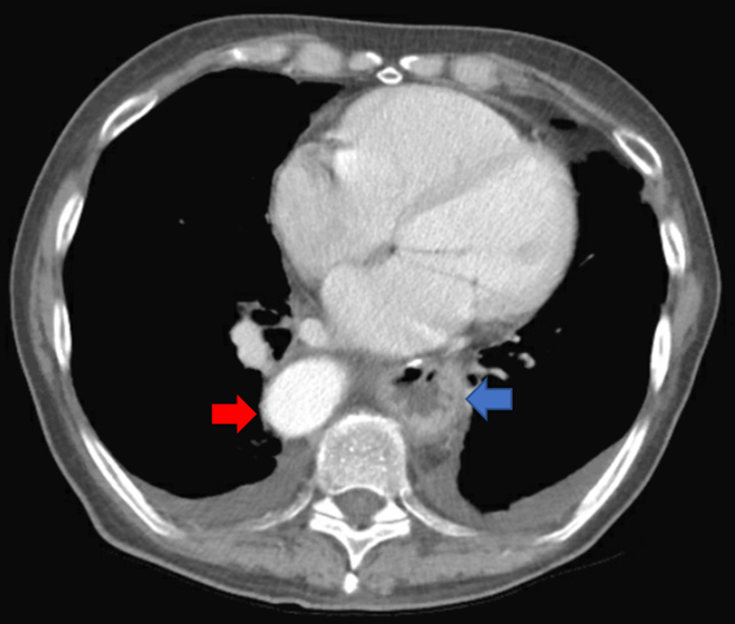 The post-operative course was complicated by acute respiratory failure with sepsis secondary to healthcare-associated pneumonia, stroke and seizures. The patient was finally discharged to long-term acute care hospital unit and then home. The patient eventually was able to eat well with no complaints of dysphagia.

One year follow up showed no evidence of recurrence of tumor.

Right-sided aortic arch (RAA), a rare congenital malformation, occurs in around 0.1% of adults (6) and was first described by Fioratti and Aglietti in 1763 (7). RAA can be isolate or as a part of a situs inversus syndrome (8). RAA secondary to situs inversus syndrome is usually diagnosed during childhood. The major symptoms of RAA includes dysphagia as a result of compression of the esophagus by the vascular ring that the arch creates (8). RAA can be diagnosed by chest radiography, esophageal barium enema and thoracic spiral CT scan with 3D image reconstruction (9).

Patients with RAA who require esophagectomy should receive a preoperative transthoracic echocardiogram to detect associated congenital heart malformations. Surgical treatment for thoracic EC usually involves a right thoracotomy due to the left position of the aortic arch and the upper mediastinal lymph nodes. However, in cases of patients with RAA, esophageal resection, lymph node removal and gastroesophageal anastomosis cannot be performed through a right thoracotomy and a left thoracotomy is required. In rare cases where double aortic arch is diagnosed, thoracotomy must be performed on the side of the more atrophic aortic arch to resect it before esophagectomy.

Our patient had a successful esophagectomy via left thoracotomy with no evidence of recurrence after 1 year follow up. Our case is unique due to the incidental finding of RAA in a patient requiring an alternative approach for esophagectomy for treatment of distal esophageal adenocarcinoma.

Reporting Checklist: The authors have completed the CARE reporting checklist. Available at http://dx.doi.org/10.21037/aoe-19-47

Conflicts of Interest: All authors have completed the ICMJE uniform disclosure form (available at http://dx.doi.org/10.21037/aoe-19-47). The authors have no conflicts of interest to declare.

Ethical Statement: The authors are accountable for all aspects of the work in ensuring that questions related to the accuracy or integrity of any part of the work are appropriately investigated and resolved. All procedures performed in studies involving human participants were in accordance with the ethical standards of the institutional and/or national research committee(s) and with the Helsinki Declaration (as revised in 2013). Written informed consent was obtained from the patient.