Definitive chemoradiotherapy is standard treatment for potentially curable squamous cell carcinoma of the proximal oesophagus (1). Strictures after chemoradiotherapy are common (2), often requiring endoscopic dilation, or a self-expanding stent if refractory to repeated dilations. Stent complications are well recognised, including bleeding, migration, fistula formation and aspiration (3). Subsequent management of airway-oesophageal fistula can be challenging as the underlying tissue is scarred by prior disease and radiation exposure. Treatments include stent removal, further stent placement, within the oesophagus or trachea, or surgical correction. Salvage oesophagectomy after definitive chemoradiotherapy, with airway-oesophageal fistulae, supported by perioperative extracorporeal membrane oxygenation (ECMO) has not before been described. We present the following case in which two stent-associated fistulae were managed surgically while the patient was supported by ECMO. We present the following article in accordance with the CARE reporting checklist (available at http://dx.doi.org/10.21037/aoe-20-43) (4).

A 47-year-old female was diagnosed with a locally advanced T4N0M0 oesophageal squamous cell carcinoma, considered to be invading the left main bronchus on cross-sectional imaging. She had a history of Hodgkin’s lymphoma, polycystic kidney disease and insulin-dependent diabetes. The patient underwent definitive chemo-radiotherapy. This involved 3 cycles of cisplatin and infusional 5-fluorouracil, followed by 50 Gy radiotherapy in 25 fractions (Fr) over 5 weeks with concurrent infusional 5-fluorouracil. Before starting radiotherapy, she developed worsening dysphagia requiring insertion of an oesophageal stent, allowing treatment completion. She was referred to our unit 6 months later with dysphagia and aspiration pneumonia secondary to erosion of the proximal stent into her trachea. Local gastrointestinal endoscopic evaluation demonstrated the fistula, but it was not possible to remove the stent. Biopsies were taken and a second stent placed to seal the fistula. Subsequent imaging (Figure 1) and bronchoscopy showed tracheal and left main bronchus fistulation into the oesophagus. Her case was discussed at the specialist multi-disciplinary team (MDT) meeting, the biopsies were benign, and PET-CT showed no evidence of metastatic disease. The timeline is shown in Figure 2. 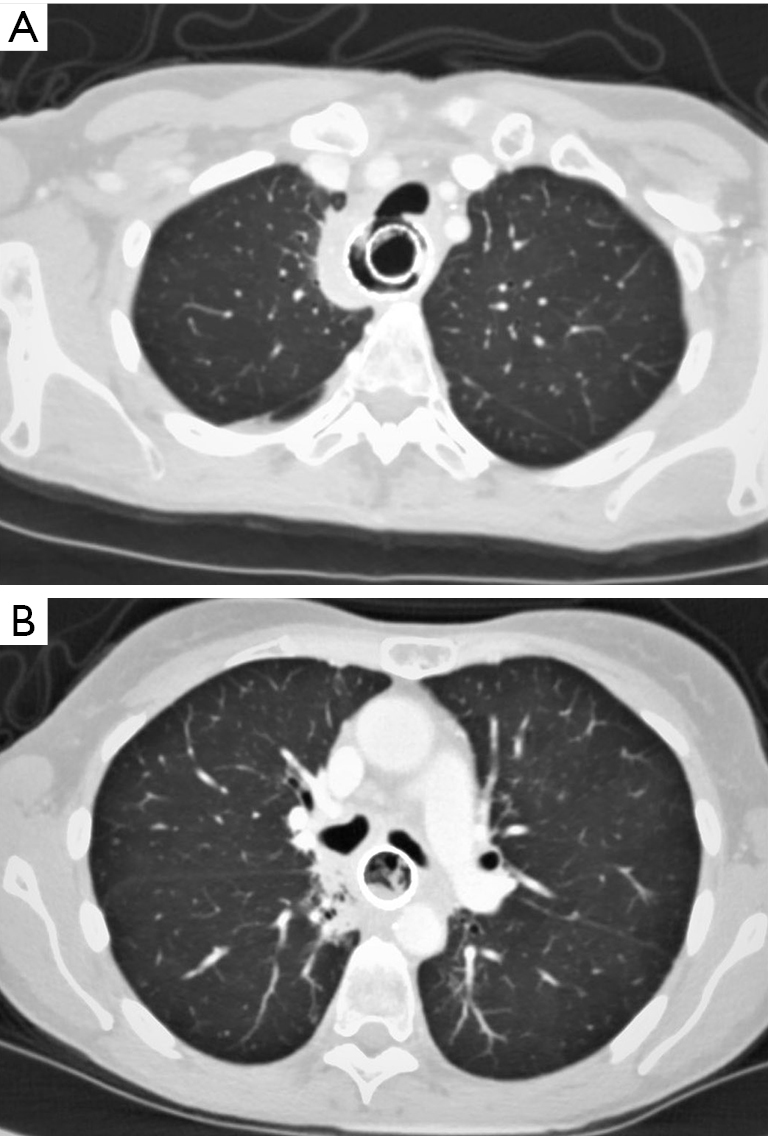 Figure 2 Timeline of diagnoses and treatments.

After further review, it was agreed to perform a salvage 3-phase oesophagectomy with retrosternal gastric pull-up and repair of both fistulas. Optimal access to the oesophagus, trachea and proximal bronchi required right thoracotomy in the left lateral position. Difficulty separating the oesophagus from the trachea and bronchi was anticipated, with risk of further undiagnosed fistulae or airway damage during dissection. An important anaesthetic priority was to avoid airway leak and soiling the lungs by excluding the left main bronchus fistula from ventilation. Another consideration was minimising airway instrumentation to reduce the risk of disrupting any repair. Several oxygenation strategies were considered (Table 1). Balancing the risks of each, the team decided the optimal strategy was to electively perform the procedure on ECMO. All procedures performed were in accordance with the ethical standards of the institutional research committee and with the Helsinki Declaration (as revised in 2013). Written informed consent was obtained from the patient.

In the anaesthetic room, the patient was preoxygenated with high flow nasal oxygenation (Optiflow™, Fisher & Paykel Healthcare, New Zealand) in the head up position, avoiding bag mask ventilation, and general anaesthesia was induced. The patient’s trachea was intubated with a Vivasight-SL (Ambu, Denmark) size 7.0, a tracheal tube with integrated high-resolution camera. This enabled placement of a 9 Fr bronchial blocker in the left main bronchus under direct vision. The tracheal tube tip was placed 2 cm above the carina, between the two fistulae. Invasive monitoring was established with right-sided central venous access and a peripheral arterial line. In the operating room, femoro-femoral 25/23 Fr access and return cannulae were inserted via a percutaneous approach. Total intra-venous anaesthesia was maintained. The patient was placed in the left lateral position (Figure 3). A paravertebral catheter was placed under ultrasound guidance for analgesia. ECMO was initiated without systemic heparinisation, allowing mechanical ventilation to be discontinued.

Surgery was performed by a combined oesophago-gastric and thoracic surgical team. A right-sided thoracotomy was performed in the 5th intercostal space with excision of the 6th rib and raising of intercostal flaps above and below (Figure 4). The oesophagus was significantly thickened and inflamed with local adhesions to the lung, secondary to the in-situ stents. The oesophagus was mobilised distally and a sling placed. The azygos vein was divided with a vascular linear stapler. Careful dissection was continued proximally with resection of the oesophagus proximally and retrieval of both stents. Two airway defects were identified. The defect in the posterior trachea was closed primarily, but the left main bronchial defect could not be apposed. The intercostal muscle flap was split. The lower portion was used to patch the bronchial defect, and the upper flap reinforced the tracheal repair. Temporary ventilation of the lungs demonstrated no leak from the airways. 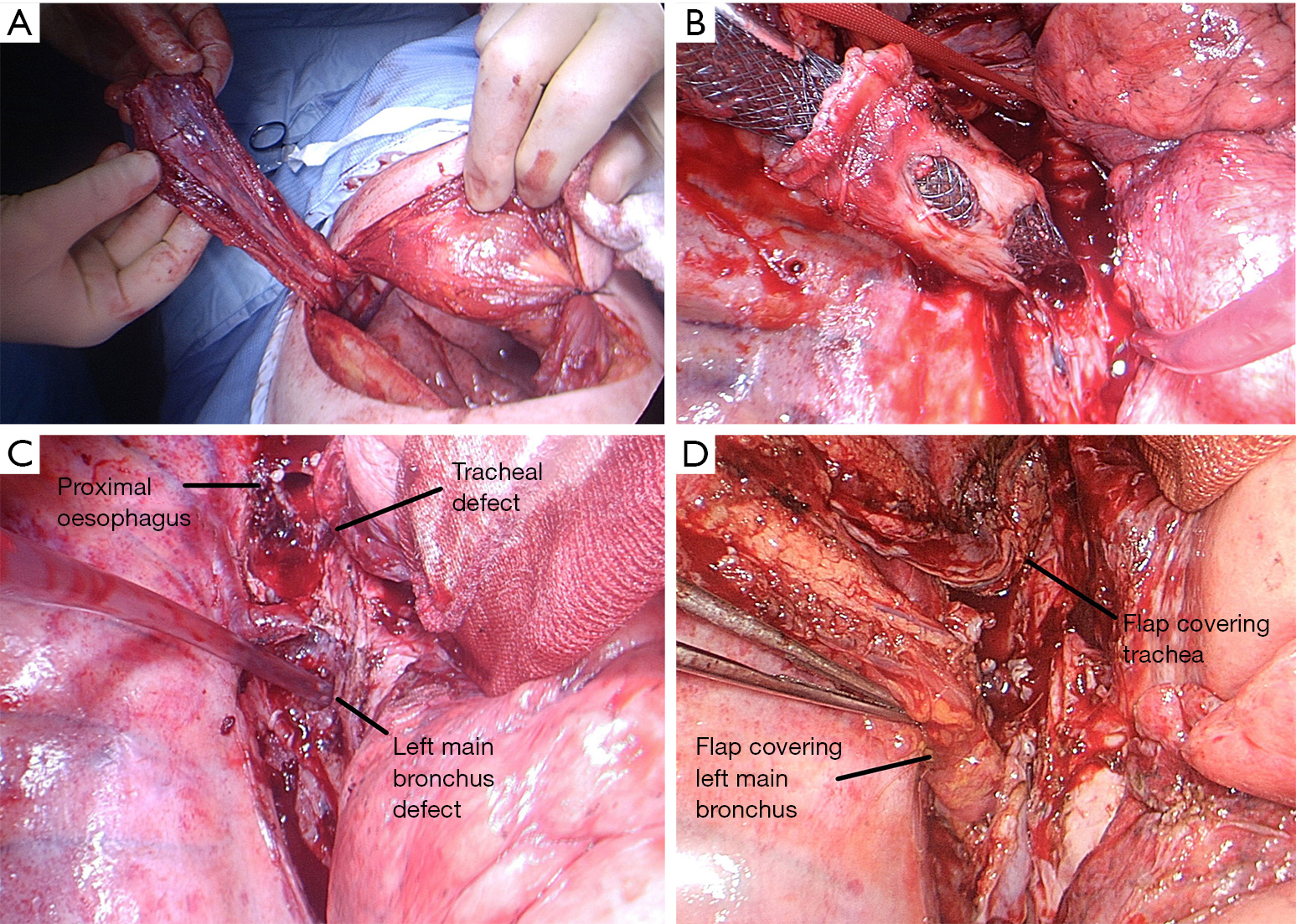 After closing the thoracotomy, the patient was placed supine. Open gastric mobilisation, oesophago-gastric resection and conduit formation was performed using a laparoscopic linear stapler. There were significant adhesions at the hiatus and in the distal mediastinum, requiring careful dissection. Left neck dissection was also performed to deliver the cervical oesophagus. A retro-sternal tunnel was created with blunt dissection, and the gastric conduit was delivered. A hand-sewn end-to-side anastomosis was performed. The tip of the conduit was excised with a linear stapler. Two chest drains were placed in the right pleural space, one drain was placed in the mediastinum, and a corrugated drain was inserted in the neck wound.

Histopathological analysis of the resected specimen showed no evidence of residual malignancy. At her most recent follow-up, 20 weeks post discharge, the patient is eating a full normal diet and her weight is stable. She has problematic nocturnal reflux despite acid suppression medication. There is no clinical evidence of disease recurrence. The patient has returned to work full-time and is able to exercise.

ECMO is a form of extracorporeal life support, initially developed in the 1970s, that can provide total body gas exchange with no reliance on the lungs (5). Whilst early use in adult patients was associated with very high mortality rates, the technique subsequently became established in neonatal and paediatric patients, with increasingly successful use in adults occurring more recently. In adults, ECMO is indicated in the management of severe acute respiratory distress syndrome (ARDS) when other ventilatory strategies have failed or caused lung injury, to allow parenchymal recovery. Six commissioned centres provide adult respiratory ECMO support through regionalised networks in the UK (6).

This report presents an important and useful strategy to safely facilitate oesophagectomy in the presence of complex airway-oesophageal fistula. The authors are only aware of three previous case reports describing the use of ECMO to maintain oxygenation for elective oesophagectomy (7-9). In two, ECMO was required due to previous left pneumonectomy (7,8). The third report from Pinelli and colleagues described oesophagectomy for multi-level oesophageal stenoses, subsequent to childhood oesophageal atresia, reconstructive surgery and iatrogenic tracheo-oesophageal fistula (9). Previous surgical alteration of the tracheo-bronchial tree precluded left-sided one-lung ventilation. In our case, ECMO was selected from a range of options. Preoperative planning anticipated a risk of additional unidentified fistulae, or major airway disruption during oesophageal dissection. As these eventualities did not transpire in our case, the alternative oxygenation strategies could have been successfully adopted. However, if these had occurred, the alternative strategies could have failed, requiring ventilation of the lung distal to the airway disruption by tracheal tube through the surgical wound, or high-pressure source ventilation through a jet ventilation catheter. Emergency ECMO mid-surgery would be near impossible due to the time taken for patient repositioning and ECMO cannulation. Elective institution of ECMO eliminated concerns about undetected fistulae or airway trauma, allowed complete discontinuation of ventilation, and facilitated a seamless transition back to a lung-protective ventilation strategy using low airway pressure (10), minimising risk of disruption to the airway repair. Continuing ECMO post-operatively facilitated early extubation.

ECMO is an invasive procedure and is associated with complications, of a primarily mechanical or haematological nature (11). Mechanical complications mirror those associated with any central vascular cannulation and include arterial or venous vascular injury, cardiac perforation or pneumothorax (when using a jugular approach). In the haematological system, ECMO may cause haemolysis but also leads to a complex and challenging balance of thrombosis and bleeding (12). The large area of contact with a non-endothelial surface is a strong activator of both inflammation and systemic coagulation. Therefore, thrombosis may occur, leading to membrane failure and/or venous thrombosis in the patient. Clotting activation may lead to a picture of disseminated intravascular coagulation which compounds the coagulopathy directly attributable to the extra-corporeal circuit (due to an acquired von Willebrand Factor deficiency and platelet dysfunction). Therefore, in the context of critical illness and/or invasive procedures, minor or major bleeding complications may occur from cannulation sites, wounds, mucosal surfaces (for example, gastro-intestinal or pulmonary bleeding) including the feared complication of spontaneous intra-cranial haemorrhage. It is routine to use systemic anticoagulation, typically with unfractionated heparin, to reduce thrombosis but this must always be balanced against the risk of bleeding. Modern, biocompatible surface coatings (Bioline, Maquet Hirrlingen, Germany) in the circuit do permit short periods of time without systemic heparinisation, where the risk of bleeding is very high, as in this case in the peri-operative period. However, limited heparinisation may in itself be an additional risk factor for post-ECMO deep vein thrombosis, which occurred in this case (13).

Salvage oesophagectomy for airway-oesophageal fistula after definitive chemoradiotherapy is a major undertaking, with significant risk of mortality and morbidity. The addition of ECMO further increases the complexity and risk of this procedure. It should only be undertaken in the setting of multidisciplinary care, after every effort has been made to ensure there is no residual malignant disease, and in patients who are physiologically fit enough to survive both the primary insult and the complications that may be expected in such cases. However, in selected patients, use of ECMO facilitates safe surgery and good results may be achieved for an otherwise intractable problem.

Reporting Checklist: The authors have completed the CARE reporting checklist. Available at http://dx.doi.org/10.21037/aoe-20-43

Conflicts of Interest: All authors have completed the ICMJE uniform disclosure form (available at http://dx.doi.org/10.21037/aoe-20-43). The authors have no conflicts of interest to declare.

Ethical Statement: The authors are accountable for all aspects of the work in ensuring that questions related to the accuracy or integrity of any part of the work are appropriately investigated and resolved. All procedures performed were in accordance with the ethical standards of the institutional research committee and with the Helsinki Declaration (as revised in 2013). Written informed consent was obtained from the patient.