Minimally invasive esophagectomy for a large malignant schwannoma of the esophagus: a case report and review of the literature

Approximately 2% of esophageal tumors are benign: leiomyomas are the most common (80%), while gastrointestinal schwannomas are rare but can occur in the stomach (most commonly), colon and esophagus (1,2). Esophageal schwannomas are identified predominantly in middle-aged women and predominantly located in the proximal esophagus (3). These lesions are challenging to diagnose in the pre-operative setting, given limited pathological markers, non-specific findings on imaging studies (CT/PET scans), resulting in elevated false negative rate. Herein we report a patient with malignant esophageal schwannoma who underwent a minimally invasive esophagectomy. Her follow up oncologic course was notable for development of a chest wall metastasis 2 years of her index surgery. To our knowledge, this is the first reported case of an initial minimally invasive esophagectomy for malignant esophageal schwannoma. We present the following article in accordance with the CARE reporting checklist (available at http://dx.doi.org/10.21037/aoe-20-14).

A 33-year-old woman presented to our clinic, following months of progressive dysphagia of several months and 75 pound weight loss during this period. Her past medical history was significant for morbid obesity, asthma and a notable smoking history (12 pack-year). Her family history was notable for hypertension and coronary artery disease, but there was no previous history of malignancy. A CT scan of the chest revealed an 8 cm in maximal diameter, large posterior mediastinal mass that was indistinguishable from the esophagus (Figure 1A). Subsequently, she underwent endoscopy, which showed a large, fungating esophageal mass extending from 30 to 38 cm from the incisors. The lesion was partially obstructing and encompassed half the luminal circumference (Figure 1B). Endoscopic biopsies suggested a spindle cell neoplasm. To better characterize the mass, an endoscopic ultrasound (EUS) was obtained, which showed a hypoechoic mass with a thickness greater than 60 mm invading the mediastinal fat (Figure 1C). Two malignant-appearing celiac axis lymph nodes were also visualized. 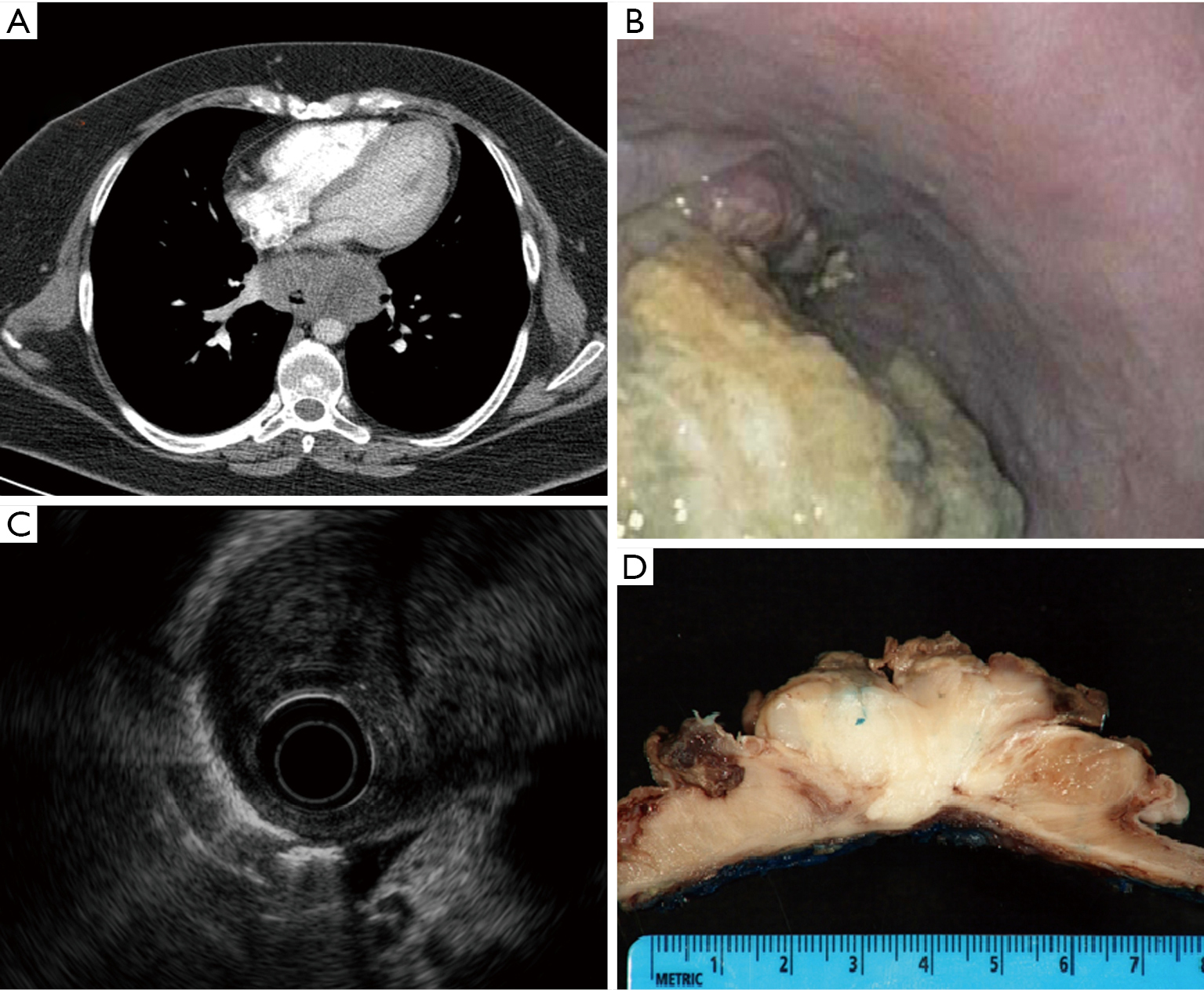 One month following her initial clinic visit, the patient underwent an on-table endoscopy, staging laparoscopy, followed by minimally invasive Ivor-Lewis esophagectomy. Due to lesion size, morphological appearance on endoscopy, and concern for malignant nodal spread, tumor enucleation was not contemplated. Endoscopy was notable for a large amount of fetid, necrotic tumor debris in the mid to distal esophagus. There was no evidence of metastatic disease within the abdomen or chest upon laparoscopic and thoracoscopic evaluation. The suspicious celiac lymph nodes on CT scan were biopsied at the time of laparoscopy and found to be benign. Resection was accomplished using a minimally invasive (laparoscopic-thoracoscopic) Ivor Lewis esophagectomy with an intrathoracic anastomosis. The lesion was resected completely with negative proximal, distal and radial margins (Figure 1D). The patient’s postoperative course was complicated by aspiration pneumonia likely related to the necrotic tumor debris in the esophagus. She was discharged to home on post-operative day 10.

Final pathology demonstrated an 8 cm malignant peripheral nerve sheath tumor (schwannoma) arising from the muscularis propria with neoplastic spindle cells. Lymphadenectomy yielded 33 lymph nodes, all of which were negative for malignancy. Immunohistochemical staining was positive for Vimentin and S100. Staining for smooth muscle markers was negative. Two months after surgery, the patient received 5,400 cGy of adjuvant radiotherapy over a 2-month time course.

One year after surgery, she was found to have a right posterior chest wall mass on routine CT surveillance. A CT-guided chest wall biopsy of the soft tissue mass confirmed metastatic malignant schwannoma (Figure 2). A PET-CT demonstrated the chest wall mass with an SUV of 7.9, but no other evidence of distant metastatic disease (Figure 2). She then underwent right thoracotomy and chest wall resection with reconstruction using Goretex mesh. Final pathology, including immunohistochemistry, confirmed that the 3.5 cm soft tissue mass was consistent with metastatic schwannoma.

Her immediate post-operative course was unremarkable and she was discharged on post-operative day 4. Her subsequent follow-up CT scans were negative for recurrence or metastatic disease, and she did not require further adjuvant therapy. Figure 3A shows the timeline of the patient’s hospital course and associated clinical and surgical pathology (Figure 3B). 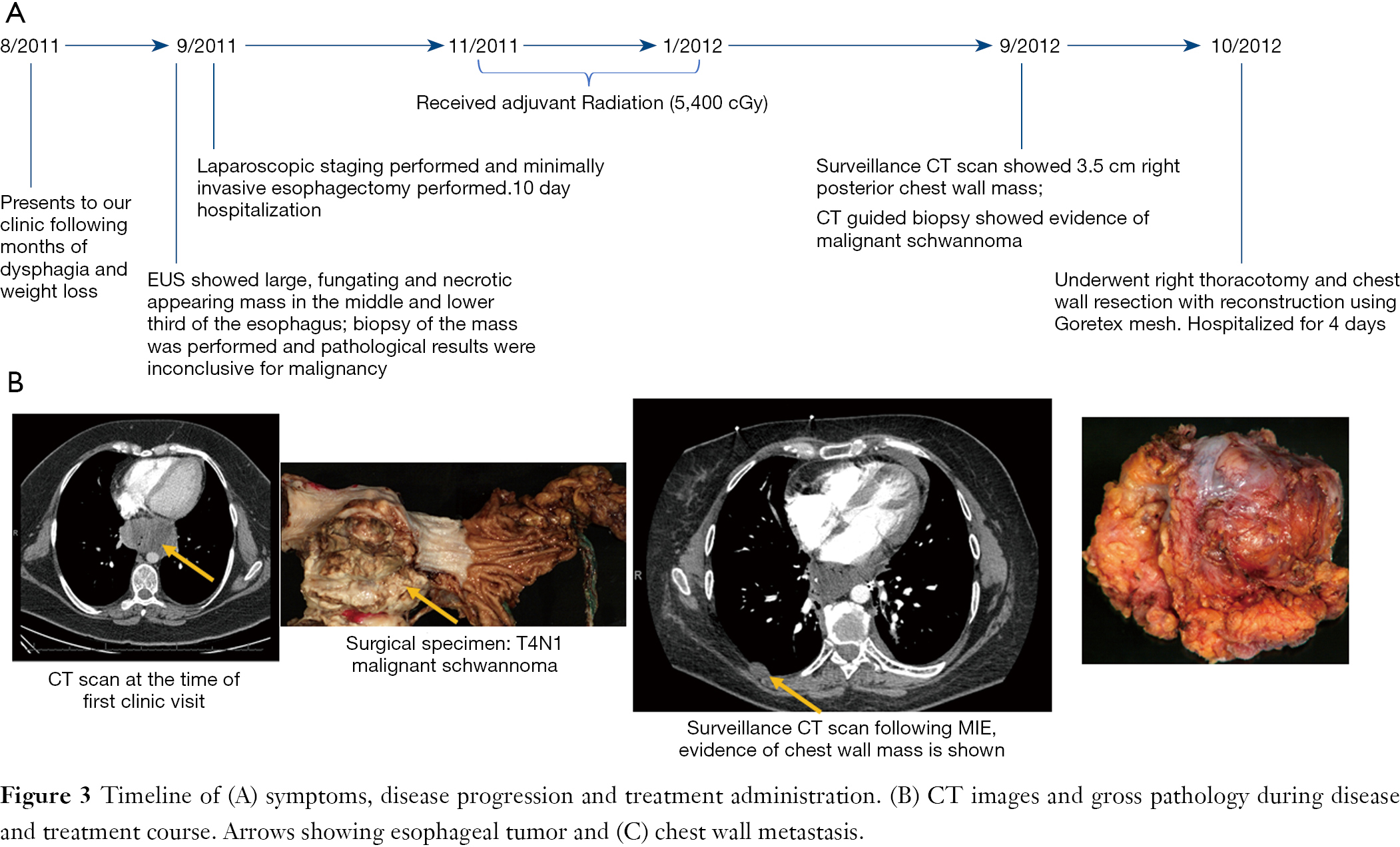 Of note, written informed consent was obtained from the patient for publication of this study and any accompanying images. All procedures performed in studies involving human participants were in accordance with the ethical standards of the institutional and/or national research committee(s) and with the Helsinki Declaration (as revised in 2013).

We presented a case in which a patient presented with dysphagia/weight loss secondary to a large esophageal lesion that was undetermined prior to surgery, and she was later diagnosed with malignant esophageal schwannoma following a MIE. Esophageal schwannomas have most commonly been identified in middle-aged women and tend to arise from the proximal esophagus (3). Dysphagia is the most common presenting symptom, but there have been reports of secondary tracheal compression resulting in respiratory distress (4,5). Symptomology (hemoptysis, dysphagia, dyspnea) commonly correlates with tumor size. Most of these lesions are benign, with only 9 reported cases of malignant esophageal schwannomas (3,6-8). Of these, only one case report of lymph node metastasis has been published (6).

Pathologic diagnosis of an esophageal schwannoma can be challenging. Accurate diagnosis by endoscopic biopsy with routine histologic evaluation can yield false negative results. In reviewing the literature, we identified only one reported case in which the tissue diagnosis was obtained prior to definitive resection (9). Imaging studies such as CT scan and barium esophagram are unable to differentiate schwannomas from other submucosal lesions of the esophagus. These studies may demonstrate a large homogenous mass causing esophageal compression and obstructive symptoms. Schwannomas are commonly hypermetabolic thus displaying increased FDG uptake on positron emission tomography (PET), but given the Schwann cells inherent ability to transport glucose for axonal repolarization, PET imaging does not aid in differentiating benign, malignant (esophageal) schwannomas, from other esophageal lesions (3,9).

Schwannomas typically show a pattern of positive immunoreactivity to S-100 protein, while being negative for smooth muscle markers: actin, desmin, CD117 and CD34. This AIDS in differentiating these lesions from other gastrointestinal submucosal tumors, such as the more common leiomyoma. Negative staining for neurofilament contributes to differentiating schwannomas from neurofibromas, another variant of peripheral nerve sheath tumor. The histologic criteria for the diagnosis of malignant schwannoma are based on a combination of factors, including the presence of mitotic figures, cellularity, nuclear atypia and tumor necrosis (10). In reports by Iwata et al. (11) and Morita et al. (12), the malignant potential of esophageal schwannoma as manifest by invasion of surrounding tissues correlated with a high mitotic rate and nuclear atypia on histology.

Esophageal schwannomas can be managed with enucleation (3,6), esophagectomy (7,8), or in very select cases with an endoscopic per-oral approach (13). Several studies, although retrospective, have proven safety and feasibility of the per-oral approach (13). Per-oral endoscopic approach is done in selected patients, particularly for lesions less than 2 cm (14). Larger lesions (2–8 cm) should be surgically enucleated and this can be achieved through a right VATs/thoracotomy approach for mid to distal esophageal lesions while some distal lesions can be removed laparoscopically. Enucleation of larger tumors (>8 cm) has been described but surgeons must be prepared to perform esophagectomy for larger tumors as the myotomy required for such an enucleation can obliterate the esophageal wall, the closure of which results in a large patulous segment of esophagus that behaves like a giant diverticulum (6). Such anatomy can leave the patient with poor esophageal function and consequently problems with oral intake.

Wang et al. (3) reported a case of 6-year disease free survival following enucleation with primary repair of the esophageal mucosal for treatment of a 5.5 cm malignant schwannoma. In patients that were not candidates for enucleation, open esophagectomy resulted 4-year recurrence free survival (7,8).

In conclusion, esophageal schwannomas are uncommon tumors (16). Malignant transformation is exceedingly rare. Diagnosis prior to resection can be difficult and is aided by recent advances in immunohistochemical staining. PET CT and EUS can be helpful tests for determining whether the tumor is behaving in a benign or malignant fashion. Patients with larger tumors should undergo pre-operative assessment for surgical enucleation and possible need for esophagectomy (17,18). In the present case described herein, the esophagus was partially replaced by tumor. Enucleation would not have been feasible in the present case, given the tumor’s size, risk for positive margins and leaving limited functional esophageal wall.

This is a retrospective study (n=1) and is the tenth case report of malignant schwannoma of the esophagus, but the first reported case in which minimally invasive esophagectomy was performed for resection. Given the rare occurrence of this case, it is difficult to generalize the management. A prospective, randomized clinical trial would be warranted to assess outcomes related to diagnostic work up and the role of surgery in this cancer subset. The data pertaining to this patient’s clinical history is limited to computer records, and may be susceptible to recall and reporting bias.

Surgical esophageal expertise with multiple treatment modalities (per oral endoscopic approach, VATS or laparoscopic enucleation, or minimally invasive esophagectomy) is needed to determine the optimal surgical approach for the patient. Surgeons must factor in the false negative rate regarding diagnostic work up for esophageal schwannoma. Malignant transformation is rarely diagnosed in the pre-operative setting, thus there should be a low threshold to proceed with surgical resection of esophageal schwannomas, in the setting of symptomology and lesion size.

Funding: This report was supported by the Department of Cardiothoracic Surgery at the University of Pittsburgh and the NCI T32CA113263-11 (Ekeke).

Reporting Checklist: The authors have completed the CARE reporting checklist. Available at http://dx.doi.org/10.21037/aoe-20-14

Conflicts of Interest: All authors have completed the ICMJE uniform disclosure form (available at http://dx.doi.org/10.21037/aoe-20-14). JL reports grants from University of Texas SWMC, grants from Anpac Tech of USA, non-financial support from Covidien, other from Intuitive Surgical Inc., Proctor and Gamble, and Cigna Corp., outside the submitted work. The other authors have no conflicts of interest to declare.

Ethical Statement: The authors are accountable for all aspects of the work in ensuring that questions related to the accuracy or integrity of any part of the work are appropriately investigated and resolved. All procedures performed in studies involving human participants were in accordance with the ethical standards of the institutional and/or national research committee(s) and with the Helsinki Declaration (as revised in 2013). Written informed consent was obtained from the patient for publication of this study and any accompanying images.