Incidence, risk factors and management of chylothorax post-oesophagectomy for oesophageal carcinoma in an Australian institution

Chylothorax is an uncommon but potentially life-threatening complication of oesophagectomy with the reported incidence varying between 0.4% and 21% (1-10). Persistent chyle leak leads to significant hypovolemia and malnutrition secondary to loss of protein, fats and vitamins. Patients are more prone to hyponatraemia and hypocalcaemia secondary to electrolyte loss (11). Significant loss of leukocytes, immunoglobulins and other proteins into the thorax gives rise to immunosuppression which may increase the risk of opportunistic infections in these patients (11). There are controversies in the literature regarding the risk factors and management of post-oesophagectomy chylothorax. The aim of this study was to establish the incidence and risk factors of chylothorax in patients undergoing oesophagectomy for oesophageal cancer. This study also aims to evaluate the management strategy for chylothorax, particularly to identify indications for early surgical intervention in the setting of a persistent chyle leak.

This retrospective study reviewed all patients who underwent oesophagectomy for oesophageal carcinoma over a 10-year period from January 2009 to December 2018 at the Royal Brisbane and Women’s Hospital (RBWH), a tertiary referral centre in Brisbane, Australia. In this institution, prophylactic thoracic duct ligation (TDL) is not employed. Feeding was started via feeding jejunostomy and increased incrementally.

Chylothorax was diagnosed by a presence of a milky white output or persistent drainage from the intercostal chest tube. If confirmation was required, chylothorax was confirmed by the presence of triglycerides of more than 1.24 mmol/L in the pleural fluid analysis.

All postoperative chylothorax cases were initially treated with conservative management. A medium chain triglyceride diet or total parenteral nutrition (TPN) were used to reduce intestinal chyle production. TDL was achieved, in the right pleural cavity, via either re-operative thoracotomy or thoracoscopy.

Statistical analysis was performed using the SPSS software program (SPSS Inc., Chicago, IL, USA). Descriptive statistics were used to summarise patient characteristics. Continuous data were expressed as a median and inter quartile range while discrete data were reported as frequency and percentage. The Chi square test or Fisher’s exact test were used to compare categorical data while the Mann-Whitney U Test was used for continuous data. Variables that were associated with chylothorax in univariate analysis at a significance level less than 0.2 were included in a multiple logistic regression. Results were reported as an odds ratio (OR) with a 95% confidence interval (CI) and two-sided P value. The Hosmer-Lemeshow test was used to test for goodness of fit for our regression model. For all analyses, a probability value (P) of less than 0.05 was considered to be statistically significant.

There were 158 patients who underwent oesophagectomy at this institution in the study period. Thirteen patients underwent operation for reason other than oesophageal cancer and were excluded. One patient was excluded as the histological reports later confirmed the diagnosis of gastric malignancy rather than oesophageal malignancy. The final cohort consisted of 144 participants. 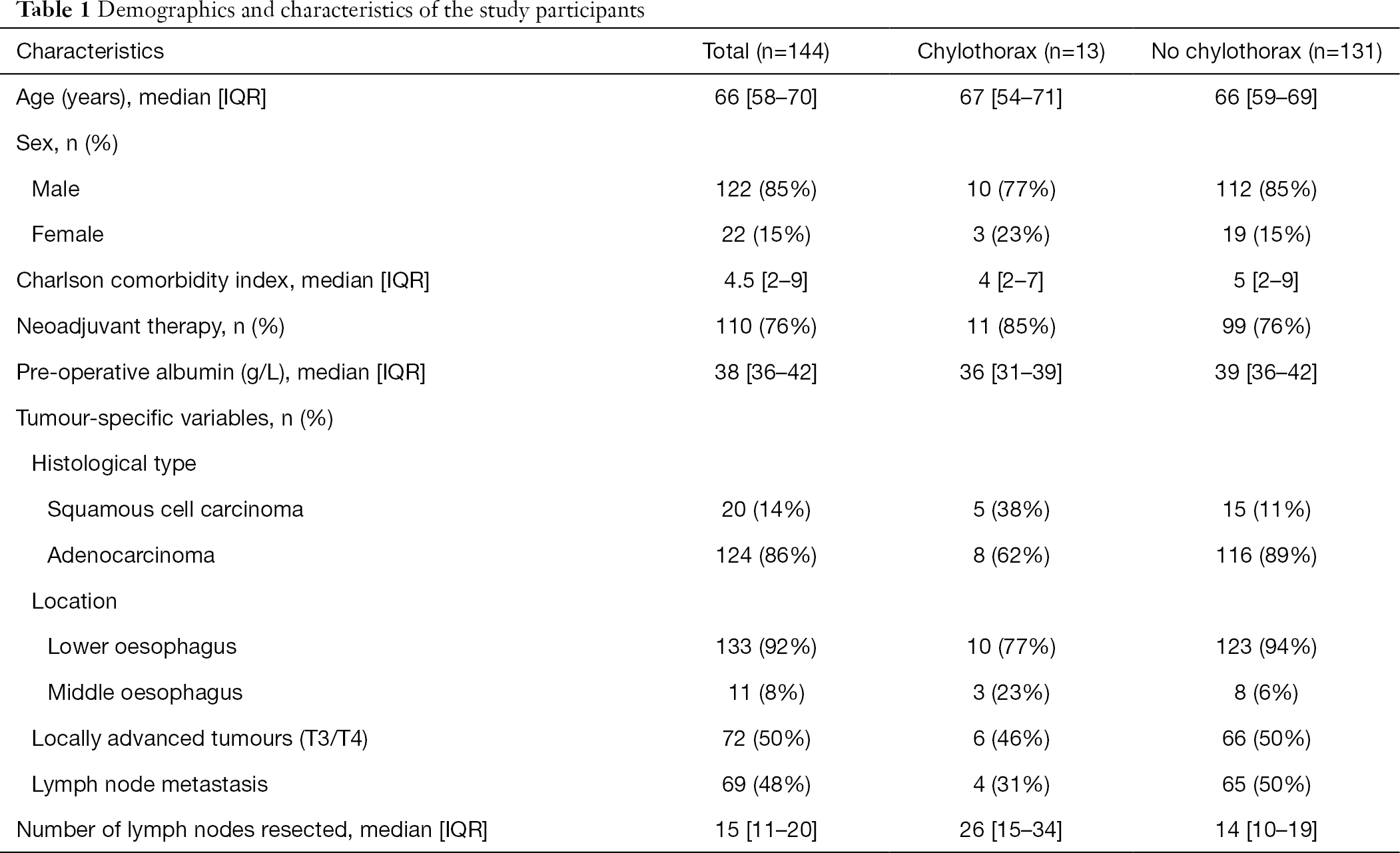 Table 1 Demographics and characteristics of the study participants
Full table

Multiple logistic regression showed that pre-operative albumin levels and the number of lymph nodes resected during the surgery are statistically significant predictors of post-operative chylothorax (Table 2). The higher the pre-operative albumin value, the lower the odds of chylothorax occurring (OR 0.836, 95% CI: 0.714–0.980, P=0.027). Higher numbers of lymph nodes resected correlated with an increased risk of chylothorax (OR 1.141, 95% CI: 1.057–1.232, P=0.001). Other tumour characteristics did not make statistically significant contribution to the prediction of post-operative chylothorax. 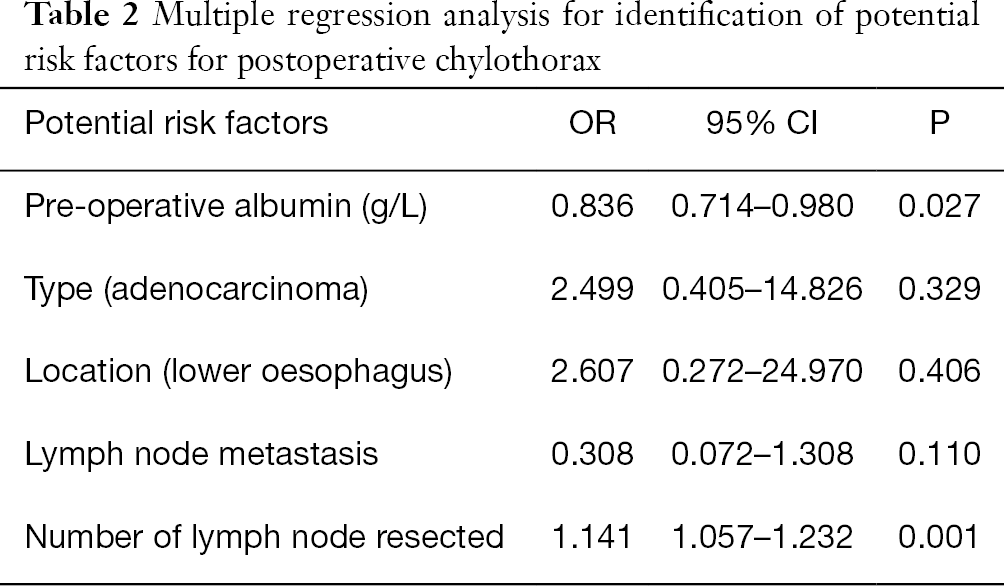 No significant association was found between chylothorax and other complications. Patients with chylothorax were found to have increased hospital length of stay (29 vs. 15 days, P=0.001). Rates of reoperation were significantly higher in the chylothorax group (77% vs. 11%, P<0.001). No patient who developed chylothorax died within 120 days of operation (Table 3). 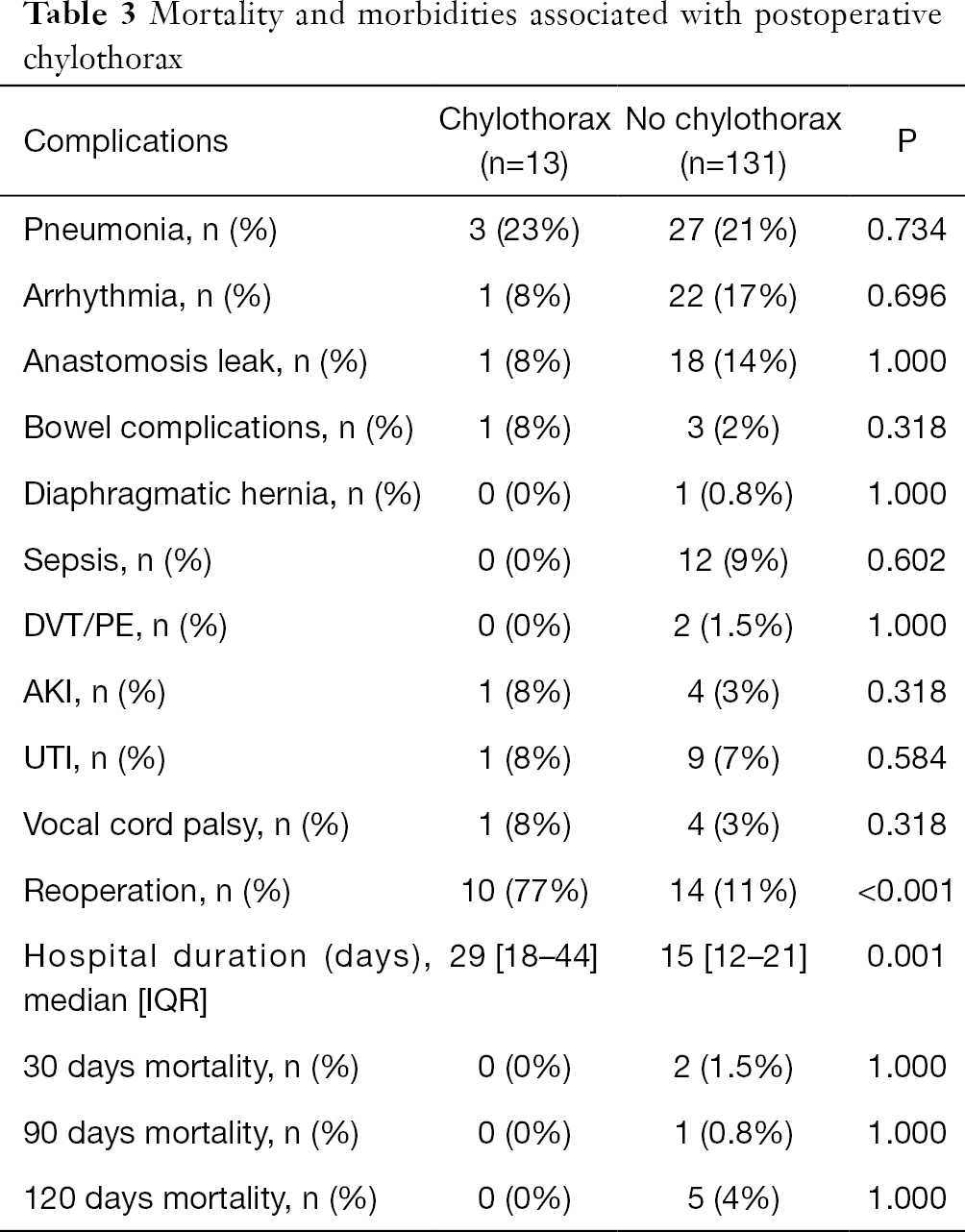 The average chyle leak outputs of multiple days were significantly different between the conservative and surgical reintervention groups while for isolated daily chest drain outputs, significant difference was only found in day 1, 2, 4 and 5 (Table 4). Using the cut off value of 1,000 mL/day for average chest drain output of 2, 3, 4 and 5 days following the diagnosis of chylothorax, the sensitivity and specificity for surgical reintervention were 75% and 100%, 75% and 80%, 71% and 100%, 86% and 100%, respectively.

Our chylothorax incidence is comparable to studies with a similar surgical approach in which the thoracic duct is not prophylactically ligated (6-8,10). There is emerging evidence in several retrospective studies (7,8,12) and one randomised controlled trial (RCT) (13), that routine TDL is an effective measure in preventing postoperative chylothorax. However, there are concerns regarding whether the benefits of routine TDL outweigh its risks. A retrospective study by Hou and colleagues (14) investigated the impact of TDL on long-term survival, reporting that overall survival was significantly reduced in the ligation group. Several recent studies have also demonstrated that TDL may have a negative impact on nutrient absorption (15,16) in post-oesophagectomy patients who by nature are predisposed to malnutrition (17).

Determination of factors that are associated with developing postoperative chylothorax is of significant importance because the mortality rate of postoperative chylothorax remains high despite improved knowledge of the problem. Historically, when conservative management was the sole treatment for chylothorax, mortality rates were as high as 50% (18,19). With appropriate surgical intervention, the mortality rate has improved and now ranges from 2.9% to 24% (3,5). In addition, consistent with the current literature, this study demonstrated chylothorax is associated with increased length of hospital stay and a higher reoperation rate (3,5).

Some authors advocated that squamous cell carcinoma of the oesophagus increases the risk of postoperative chylothorax (2,5), while others suggested there is no association (3,4,20). No such link was observed in this study. Controversy continues as to whether neoadjuvant therapy is a risk factor for chyle leak. Kranzfelder and colleagues (2) found receiving neoadjuvant therapy to be a significant risk factor for chylothorax, but this study and others (5,20) found no such relationship.

Multiple regression showed that low preoperative albumin is an independent risk factor for postoperative chylothorax. This association is plausible because serum albumin, as a surrogate marker for nutrition status, has been well demonstrated in the literature as an important risk factor for complications, morbidity and mortality in major surgical procedures (21), including oesophageal surgery (22).

This study also suggested that the number of lymph nodes harvested increases the risk of post-oesophagectomy chyle leak. This association has not been reported in previous oesophagectomy studies. However, similar findings have been demonstrated in different types of general surgical procedures (23,24).

To date, there is no consensus on the optimal timing and indications for early surgical reintervention for chylothorax management. Previous studies recommended TDL is needed when chest drain output is more than 1,000 mL/day, but the optimal timing for intervention varies between studies (4,25-27). Some authors have established the cut off volume based on output per kg of body weight, ranging from 10 mL/kg/day (20) to 13.5 mL/kg/day (3). The recommendation for surgical intervention from all of the above studies is based on a single daily chest drain volume. Decision for reoperation based on an isolated daily chest drain output may not be reliable because chyle leak volume can fluctuate significantly from day-to-day. An average drain volume of multiple days would be a better representation of the chyle leak volume trend, hence a better tool for guiding reoperation decisions. This study also supported that 1,000 mL/day is an appropriate cut off value for surgical intervention.

There are several limitations of this study. Firstly, this is a single institution study. Secondly, sample size is small owing to the low incidence of oesophagectomy in Australian population, at least in part due to high rates of metastasis at diagnosis detected on PET imaging. The retrospective nature of our study limits the quality of its evidence. However, due to the low incidence of post-oesophagectomy chylothorax, it is unlikely that any prospective trial will be conducted in the future.

Ethical Statement: The authors are accountable for all aspects of the work in ensuring that questions related to the accuracy or integrity of any part of the work are appropriately investigated and resolved. Ethical approval was granted by Queensland Health Metro North Human Research Ethics Committee and RBWH Site Specific Assessment.