Gastrectomy is the most common gastrointestinal surgery in Japan. Thoracic esophageal cancer in patients who underwent surgery has a history of gastrectomy in 3–10% of cases (1). Whether post-gastrectomy conditions lead to esophageal carcinogenesis is controversial. Distal gastrectomy is a good model for clinically examining esophageal reflux. It has been reported that symptomatic duodenal gastric reflux is the most frequent symptom of post-gastric surgery and is present in 35% (2).

Gastrectomy causes truncal vagotomy (TV), widening of the angle of His and small gastric remnant reduction. TV causes a decrease in gastric motility. The widening of angle of His causes deterioration of lower esophageal sphincter (LES). A small remnant stomach cannot accommodate a large amount of stomach content. These factors facilitate reflux of duodenal juice into the esophagus after gastrectomy.

This study examined whether reflux of duodenal juice to the esophagus is involved in esophageal carcinogenesis. We present the following article in accordance with the ARRIVE reporting checklist (available at http://dx.doi.org/10.21037/aoe-20-47).

We used 8-week-old male Wistar rats (250–300 g). We are accountable for all aspects of the work in ensuring that questions related to the accuracy or integrity of any part of the work are appropriately investigated and resolved. This study complies with the ethical regulation of the use of laboratory animals and all experiments follow the animal experiment guideline in the Kindai University. All procedures involving animals were reviewed and approved by the Institutional Animal Care and Use Committee of Kindai University (KAME-22-02). 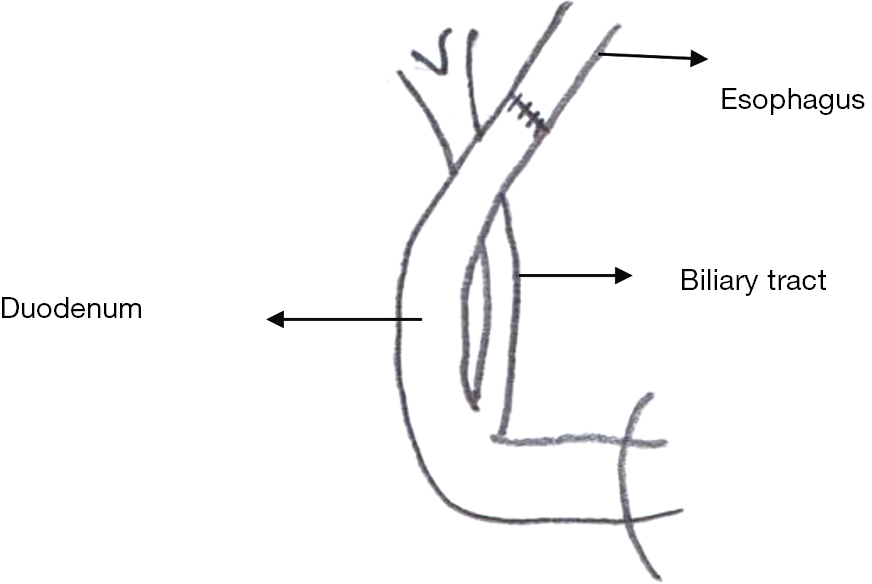 A total gastrectomy was performed and reconstruction was performed with an esophageal-duodenal anastomosis to create a model in which duodenal content refluxed into the esophagus. This procedure is the same as previously published (4).

Rats were sacrificed at 40th week after surgery under general anesthesia. The middle and lower esophageal tissues were collected, half were frozen at −80 °C and used for the measurement of oxidative stress, and the other half were fixed with 10% formalin and stained with HE and COX2. We measured bile acids in the common bile duct and in esophageal lavage fluid.

The collected esophagus was rinsed with 0.5 cc of saline, the solution was centrifuged at 1,500 rpm at 4 °C for 5 min, and the supernatant was measured for bile.

Moreover, bile was collected by inserting a thin tube into the common bile duct.

Data are expressed as mean ± standard deviation (SD) of each group. Student’s t-test was used for statistical analysis. P<0.05 was considered statistically significant.

In the lower and middle esophagus in EDA rat, thickening and shortening of the wall were observed, and a small polypoid mass was present. 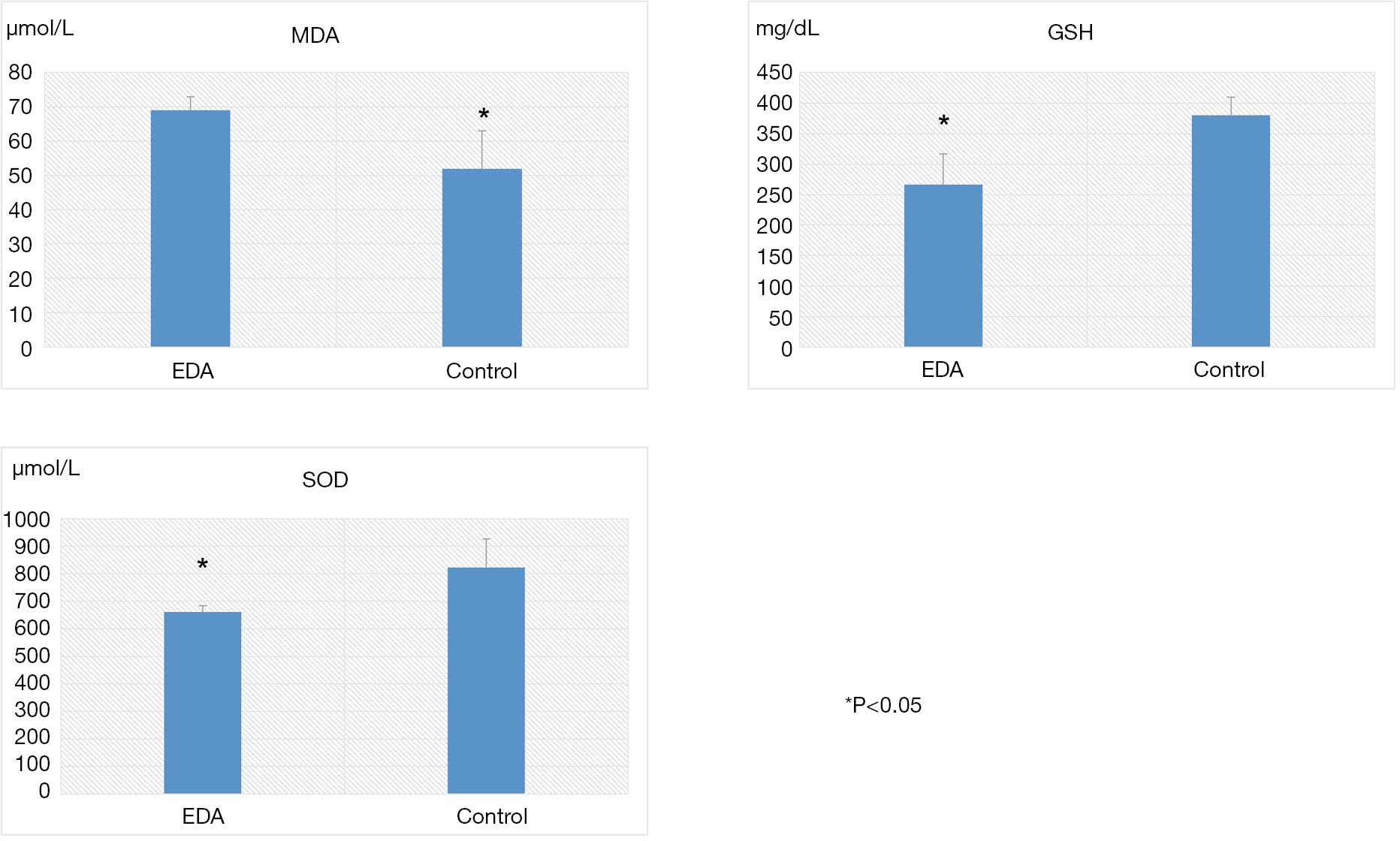 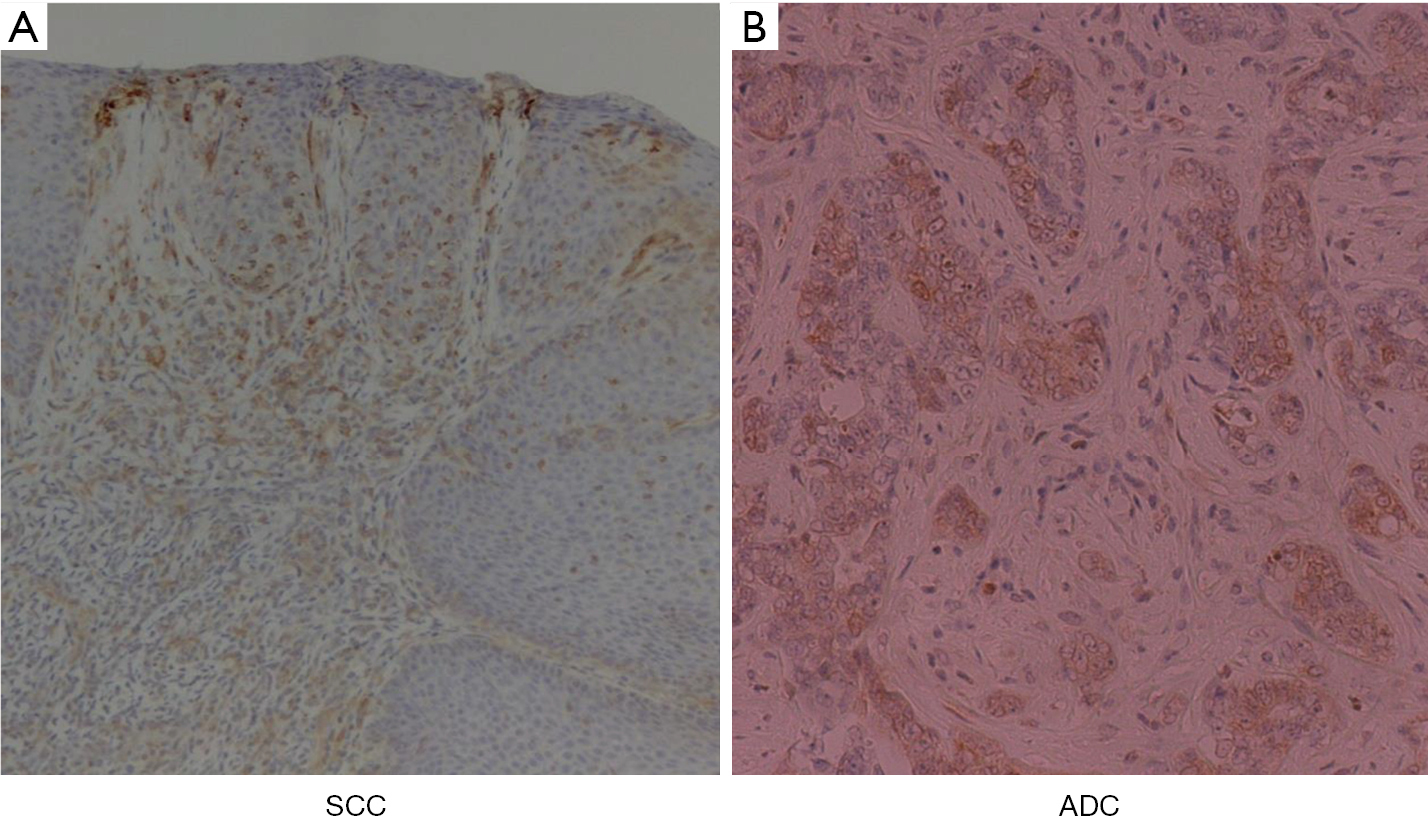 SCC and ADC were strongly stained with COX2 protein in EDA rat. COX2 staining was strong in dysplastic and cancerous esophageal mucosa obtained from EDA rat (4).

However, COX2 staining was not observed in the esophageal mucosa from the control rat.

Gastroesophageal reflux disease (GERD) and Barrett’s esophagus are major risk factors for ADC, and the risk of developing ADC increases with the frequency and duration of reflux symptoms. We believe that frequent reflux of gastroduodenal fluid containing acids, pepsin, and bile induces Barrett’s esophagus.

Some clinical reviews have highlighted the significance of chronic duodenal gastroesophageal reflux in the development of Barrett’s esophagus (6). In addition, chronic esophageal reflux of duodenal contents in our EDA model caused CLE, SCC and ADC.

Bile acids are known to promote gastrointestinal cancer growth, but the underlying mechanism is unknown. Recently, there have been many reports on the significance of bile acids in carcinogenesis.

Bile acids stimulate cell signaling effects including c-myc, COX2 and nuclear factor (NF)-κβ, and therefore, bile acids may be involved in carcinogenicity (7). Nehra et al. (8) collected and analyzed bile acids in the esophagus from patients without GERD and with GERD. They reported that TCA and TDCA were significantly higher concentrations in the reflux fluid of patients with erosive stenotic esophagitis. Chen et al. (9) reported that a high-fat diet increased the proportion of taurine conjugates, and chronic exposure of TCA to the esophagus caused tumor progression in a rat reflux model. Hong et al. (10) reported that TDCA significantly increased cell proliferation in EA cells. Piessen et al. (11) showed that TCA, TDCA, and TCDA were potent activators of MUC 4 expression. MUC4 (mucin 4) is a membrane-bound mucin that is overexpressed in the early stages of esophageal carcinogenesis and is involved in tumor progression. Zhang et al. (12) reported that TCA, TCDCA and TDCA individually, and also in a mixture, induced apoptosis of cultured human normal esophageal mucosal epithelial cells. These bile acids are involved in esophageal carcinogenesis. In our rat model, analysis of bile acids in the common bile duct of total gastrectomized rats also showed that TCA, TDCA and TCDCA and TUDCA were significantly higher than those in control rat. We suggest that TCA, TDCA, TCDCA and TUDCA play an important role of esophageal carcinogenesis. In contrast, Nishioka et al. (13) reported that chenodeoxycholic acid (CDCA) stimulates proliferation of esophageal squamous cell carcinoma (ESCC) cells. These results suggest that the effect of bile acids on cell proliferation varies with bile acid type and cell line studies. Shirvani et al. (14) suggest that bile acids stimulate COX2 expression. These phenomena are associated with chronic inflammation and proliferation in cancer and Barrett’s esophagus.

We confirmed that COX2 was strongly stained in cancer and atypical mucosa obtained from rats with esophageal duodenal anastomosis. In contrast, COX2 was not stained in esophageal mucosa from the control rat. Moreover, oxidative damage has been proposed as a possible mechanism for human GERD and possibly also CLE. Barrett’s esophagus is a complication of GERD. This specialized intestinal metaplasia is considered a premalignant condition of the esophageal carcinoma that is rapidly increasing in incidence. For the development of carcinoma, oxidative stress has been suggested to be a driving force. Furthermore, ROS can activate a number of cancer-associated signaling pathways such as PI3K/Akt, ERK1/2, and NF-κB (15). In EDA rats, MDA in the esophageal tissue was higher than that in control rat, and SOD and GSH in the esophageal tissue were much lower than those in control rat. In our study, lipid peroxidation in the esophageal epithelium was significantly higher in the EDA rat than that of control rat. These results indicate a possible mechanism by which bile acids (TCA, TDCA, TCDCA, TUDCA) dramatically increase intracellular ROS levels and subsequently induce COX2 in a rat model of duodenal esophageal reflux (Figure 5). The elucidation of the detailed mechanism by which bile acids induce COX2 may facilitate the development of chemoprevention strategies to reduce the risk of carcinogenesis in gastroesophageal tracts exposed to bile acids. 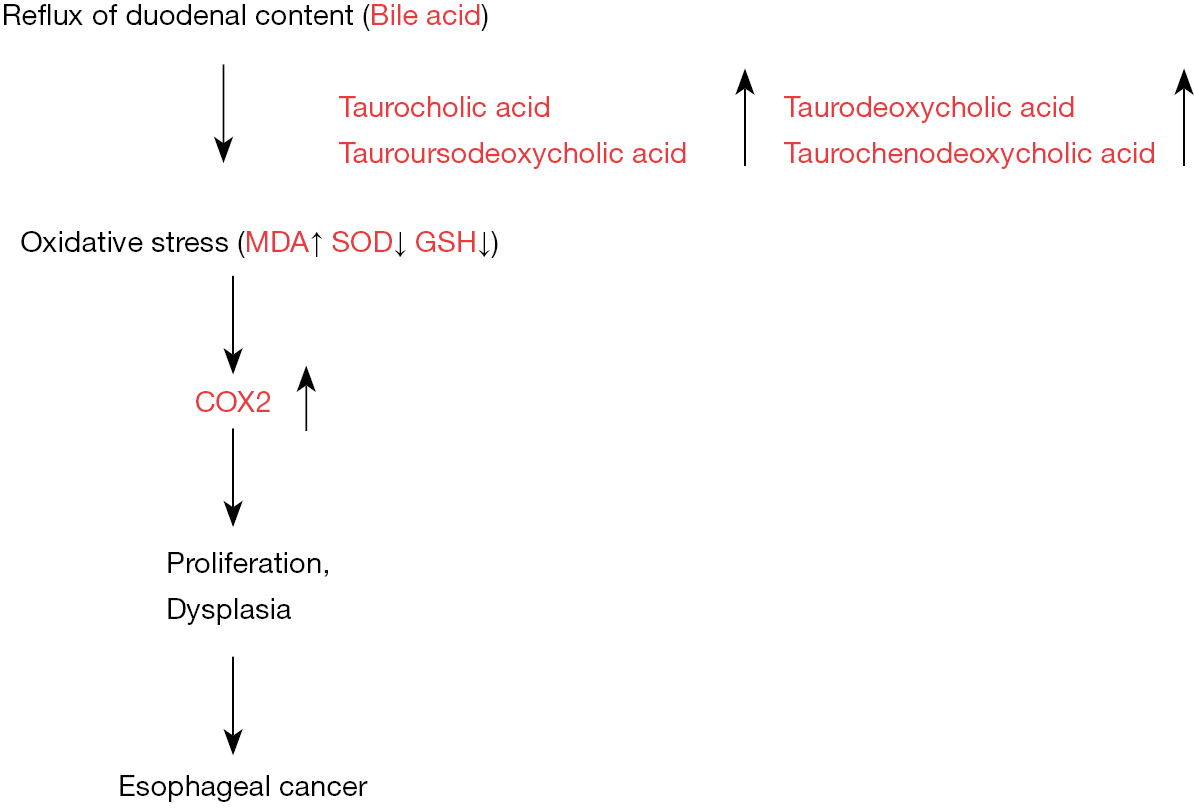 Reporting Checklist: The author has completed the ARRIVE reporting checklist. Available at http://dx.doi.org/10.21037/aoe-20-47

Conflicts of Interest: The author has completed the ICMJE uniform disclosure form (available at http://dx.doi.org/10.21037/aoe-20-47). NH serves as an unpaid editorial board member of Annals of Esophagus from Apr. 2019 to Mar. 2021. The author has no other conflicts of interest to declare.

Ethical Statement: The author is accountable for all aspects of the work in ensuring that questions related to the accuracy or integrity of any part of the work are appropriately investigated and resolved. This study complies with the ethical regulation of the use of laboratory animals and all experiments follow the animal experiment guideline in the Kindai University. All procedures involving animals were reviewed and approved by the Institutional Animal Care and Use Committee of Kindai University (KAME-22-02).