Esophagectomy in Barrett’s esophagus with high-grade dysplasia—is there still a role?

Esophageal adenocarcinoma is the most serious complication of gastroesophageal reflux disease (GERD) due to a high morbidity and mortality (1). Fortunately, only a minority of cases of GERD progress to cancer since special conditions must be present such as the presence of bile in the refluxate (2), making the path from heartburn to cancer not an inexorable occurrence (3). Moreover, in those cases that progress to cancer, there is a progression from GERD to Barrett’s esophagus (BE), with metaplasia only to BE with low grade dysplasia, to BE with high grade dysplasia (HGD) and to carcinoma in situ (4). This predictable progression led most surgeons at the turn of the century to adopt a radical therapy before a carcinoma developed, advocating an esophagectomy in HDG (5). Also, the percentage of adenocarcinoma found in repeated biopsy or esophagectomy specimens for HGD (misdiagnosis based on endoscopic biopsy) reached a very worrisome 43% (5). Endoscopic ablative therapy for BE was in a preliminary stage at that time (6).

Currently, there are rigid protocols for BE endoscopic biopsy, improved endoscopic visualization technology, and pathologists are aware of interobserver variability employing double evaluation in cases of HGD (7). Also, ablative and resection endoscopic techniques have been developed with excellent results (8). In this setting, one may ask if there is still a role for esophagectomy in BE with HGD.

This review focuses on data from the last 5 years (2015–2020) that may shed light on the role for esophagectomy in BE with HGD.

In the last 5 years, is there still a high incidence of missed diagnosis of adenocarcinoma in Barrett’s esophagus and high-grade dysplasia?

Underdiagnosis of adenocarcinoma in BE seemed to be the major concern in the past (7). More recent studies showed a larger proportion of overdiagnosis of HGD (9). An international multicenter study including 485 patients originally diagnosed with HGD showed that, after additional protocol endoscopy with an extensive biopsy sampling and review by expert pathologists, 33% had indeed an overdiagnosis of HGD. On the other hand, 18% had a missed adenocarcinoma (9). These findings led some experts to adopt a conservative approach based on surveillance only (10). Also, the fear of a missed adenocarcinoma may have diminished, as even T1 adenocarcinomas may be treated endoscopically. In fact, the American Gastroenterology Association guidelines recommend that endoscopic therapy should be preferred over esophagectomy for BE patients with intramucosal esophageal adenocarcinoma (T1a), and that it is a reasonable alternative to esophagectomy in patients with submucosal esophageal adenocarcinoma (T1b) with low-risk features [<500-µm invasion in the submucosa (sm1), good to moderate differentiation, and no lymphatic invasion] especially in those who are poor surgical candidates (11). The same is advocated by the National Comprehensive Cancer Network guidelines (12). The modern literature regularly treats HGD and early cancer (T1a) as a single entity.

In the last 5 years, is esophagectomy in Barrett’s esophagus and high-grade dysplasia still a morbid procedure

Esophagectomy is certainly a morbid procedure. Esophagectomy for HGD; however, does not add malnutrition—that is usually found in cases of advanced cancer or achalasia—to the burden of the operation. Operations are frequently also not as radical thus they are technically less demanding.

Esophagectomy is the option to treat HGD in 5% to 8% of cases in populational studies (10,13). This low rate is probably related to the fear of complications after an esophagectomy. In 2015, a review of 7 comparative papers (14) showed rates of major complications of 4% to 59% for endoscopic therapy and esophagectomy, respectively. Mortality was very low in both arms, 0–1% for endoscopy and 0–2% for esophagectomy. Overall, in the current literature, mortality may still reach 2–5%, with a morbidity up to 63% (15,16).

In the last 5 years, are the results for ablative therapy good enough from an oncologic point of view to replace esophagectomy in the treatment of Barrett’s esophagus and high-grade dysplasia?

A review in 2015 of 7 comparative papers (14) showed rates of remission of 83–98% and 97–100% for endoscopic therapy and esophagectomy, with 5-year survivals of 83–91% and 80–92% respectively. Even though numbers are very similar, the recurrence rate was much higher for endoscopy: 0–20% versus 0–2% for surgery. There is only one recent study comparing esophagectomy versus endoscopic treatment (15). This cohort study showed at 12-month follow-up a recurrence rate of 5.6% for endoscopy but 2.6% for esophagectomy. Outside the comparative setting, a systematic review of 41 studies showed a low recurrence rate of about 1.5% per year (17). Progression to adenocarcinoma is rare.

What about the lymph nodes? Endoscopic therapy may be very effective to treat the T stage while the N stage is only treated by an esophagectomy with lymphadenectomy (that may be performed with different degrees of radicality). The risk of nodal metastases in HGD is neglectable. If a T1a adenocarcinoma is present, the risk is in the range of 5% but it increases to 15% to 30% if a T1b is present (18). Tumor size, differentiation, and the presence of lympho-vascular invasion are also predictive of nodal metastases (14,18).

In the last 5 years, are there specific situations that demand an esophagectomy in the treatment of Barrett’s esophagus and high-grade dysplasia?

Some surgeons defined specific situations where an esophagectomy would be superior to endoscopic treatment. These situations would comprise cases with a high probability of nodal metastases, incomplete endoscopic resection or ablation, very long segment of BE with multiple areas of HGD/carcinoma, or inability or unwillingness of the patient to have a strict endoscopic follow-up. These circumstances are listed in Table 1. 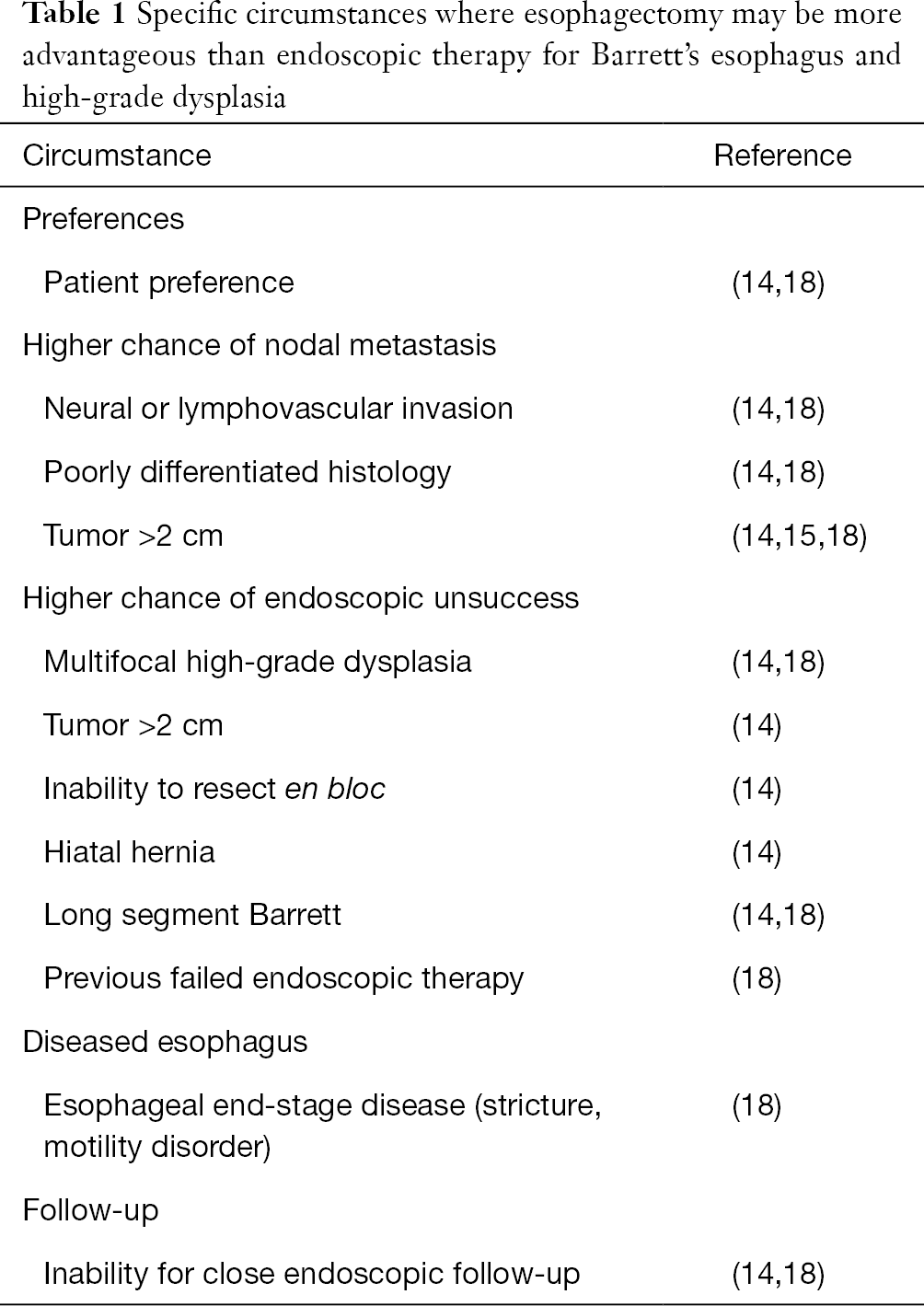 Is there still a role for esophagectomy in Barrett’s esophagus and high-grade dysplasia in the last 5 years? The simple answer is yes. Esophagectomy remains an acceptable treatment especially where endoscopic therapy is not available with high standards of equipment and expertise, even though it is still a morbid operation. Moreover, esophagectomy is the rescue therapy when endoscopic treatment fails.

Conflicts of Interest: Both authors have completed the ICMJEuniform disclosure form (available at http://dx.doi.org/10.21037/aoe.2020.02.04). The series “How Can We Improve Outcomes for Esophageal Cancer?” was commissioned by the editorial office without any funding or sponsorship. FAMH served as the unpaid Guest Editor of the series. MGP serves as an unpaid editorial board member of Annals of Esophagus from Mar. 2020 to Feb. 2022. The authors have no other conflicts of interest to declare.